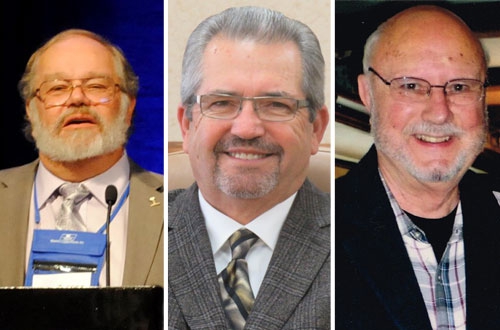 Left to right, John Zuspan; Rick Ebersold and Ron Brown have selected as entrants into the NRC Hall of Fame and will be inducted at the association’s annual conference in January 2017.

The National Railroad Construction & Maintenance Association (NRC) has announced the selection of Ronald Brown, Rick Ebersold and John Zuspan by the association’s executive committee as this year’s additions to the NRC Hall of Fame.

Ronald Brown founded Annex Railroad Builders (Annex) in 1961 in Indianapolis, Ind. Within two decades, Annex became recognized as one of the larger railroad contractors in the Midwest, employing more than 100 staff members. In 1986, Annex purchased a small shortline railroad, establishing the Central Indiana & Western Railroad that continues operations today. In 1998, Annex, along with 13 other companies, joined to form a new contracting company: RailWorks. After working for RailWorks for three years, Ronald retired in 2001.

“Ron was truly a pioneer in our industry…a true advocate for [the NRC],” said NRC Hall of Fame member James J. Daloisio of the Railroad Construction Co. of South Jersey.

As a founding member of the NRC, the association says Brown was instrumental in its success from the beginning. He was also a member of the Union Negotiating Committee and a management trustee, playing a key part in the development of the Trust Funds under the Railroad Transportation and Operation Agreement.

Rick Ebersold began working in the rail industry 45 years ago as a laborer for the Chicago and North Western Railway. The Herzog management team noted Ebersold’s work ethic and hired him in 1973 as a foreman. He moved up the ranks from general superintendent to project manager, managing many successful projects throughout the country. He was promoted to serve as president of Herzog’s rail testing group in 1992.

“Rick has been a true father figure and mentor to his employees,” said Scott Norman, senior vice president at Herzog Contracting Corp.

The NRC notes that Ebersold has promoted legislative priorities on behalf of Herzog and the NRC. He previously developed Hours of Service reform, which he presented to Federal Motor Carrier Safety Administration officials and the chair of the House Transportation & Infrastructure Subcommittee on Highways and Transit, which led to its inclusion in the Fixing America’s Surface Transportation Act which became law under the direction of President Obama on Dec. 4, 2015.

Alan Landes, Herzog president and COO, says Ebersold “epitomizes all the good things in our company” and is a “team player…[who] never hesitates when accepting a task for Herzog.”

Ebersold began serving the NRC board in 1999, where he held many positions including chairman and executive director, a time during which he trained the incoming NRC President and CEO Chuck Baker, who continues in this position. The NRC says that under Ebersold’s leadership, the association’s membership increased from 150 member companies to more than 200, with conference attendance jumping by 75 percent. Ebersold also created a partnership with the Railway Engineering-Maintenance Suppliers Association (REMSA), including a joint trade show and concurrent meetings, which the NRC says has helped the annual NRC Conference become one of the major North American railroad events.

Ebersold has also served on the REMSA board of directors, and has been a member of American Railway Engineering and Maintenance-of-Way Association (AREMA), the Northwest Maintenance of Way Rail Club and the American Short Line and Regional Railroad Association.

With more than 40 years of rail industry experience, Zuspan began his career as a track laborer at Atlas Railroad Construction. He moved to Delta Railroad Construction (Delta) as a switch foreman in 1978. Two years later, he left Delta to take on a role as a superintendent of track position at Slattery/Skanska. He then moved to Balfour Beatty Rail to serve as vice president in 2001.

“Without John’s help, many individuals and small businesses may not have succeeded,” said Stanley Beaver, Balfour Beatty Rail’s safety and environmental director. “Very often his help comes without charge in the form of advice and encouragement. John is never too busy to take time to help individuals working through complex issues.”

Zuspan decided to leave Balfour Beatty Rail in 2004 and start his own business, Track Guy Consultants, after identifying a need for training in track maintenance and construction in the construction industry, including Federal Railroad Administration (FRA) track safety standards. He has also written 11 handbooks on track construction, maintenance and management.

He serves on the NRC Board and the NRC Safety Committee, and the NRC says he has been influential in the production of various safety training DVDs that have become a staple of the NRC’s promotion of railroad construction safety. Zuspan has led efforts to create the Part 243 Minimum Training Standards template for NRC members, as well. He has participated in Railroad Day on Capitol Hill and is an active participant of AREMA committees.

“The NRC is honored to induct John, Rick and Ronald into the NRC Hall of Fame,” the association said in a statement.

The new Hall of Fame members will be recognized at the 2017 NRC Conference in Boca Raton, Fla., on Wednesday, Jan. 11.