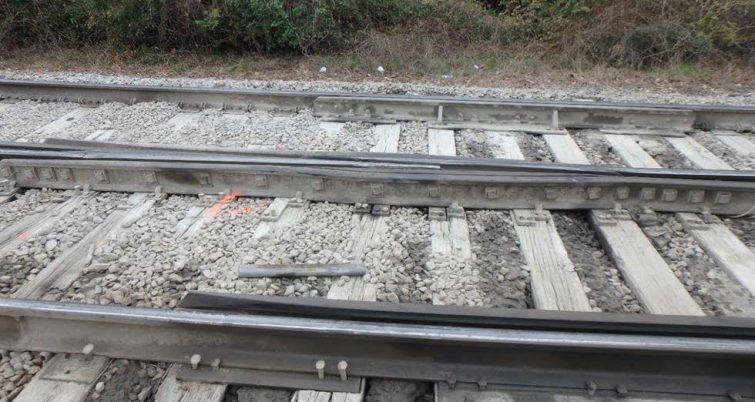 Photograph of the track frog at accident location.
NTSB

The NTSB has released its report on a CSX employee fatality that took place on Nov. 30, 2018.

On November 30, 2018, at 10:20 a.m. local time, CSX Transportation (CSX) northbound freight train F-794-30, traveling about 50 mph, struck and killed a CSX track welder. The accident occurred at the North End Estill Siding switch, milepost (MP) S-449.7, on the CSX Columbia subdivision in Estill, South Carolina. The welder was occupying the track as the train approached. An additional roadway worker, a trackman, was at the work location and had been assigned to serve as a watchman, which involved watching for approaching trains and providing a warning to the welder. The crewmembers of train F-794-30 told National Transportation Safety Board (NTSB) investigators that they did not realize that a person was on the track until moments before impact. The crew of train F-794-30 sounded the train horn and bell; however, there was no response from the roadway work group.

What the NTSB found

The probable cause of the roadway worker fatality in Estill, South Carolina, was the failed implementation of train approach warning. Contributing to the accident were: (1) the decision by CSX Transportation management to use train approach warning instead of establishing working limits, (2) the decision by the watchman to cease his train detection and warning efforts to engage in other work while the welder was still working on an active track, and (3) the decision of the welder to remove his high-visibility safety apparel before leaving the work site.​

You can read the NTSB full accident brief.