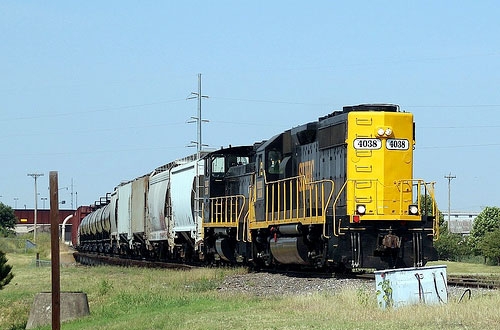 Oklahoma awarded the opportunity to purchase a 97.5-mile line known as the Sooner Sub to the Stillwater Central Railroad, L.L.C. (SLWC), a subsidiary of Watco Transportation Services, L.L.C. BNSF also made an offer on the line, which runs between Del City, Okla., and Sapulpa, Okla.

“We are extremely pleased with the state’s decision to sell the Sooner Sub to the Stillwater Central Railroad. The support we have had from our customers and interchange partners throughout this entire process was extremely humbling,” said Ed McKechnie, chief commercial officer of Watco Companies, the parent company of SLWC.

SLWC currently operates over the Sooner Sub and the line has been called the heart of SLWC’s rail network. SLWC said many of the current customers on the Sooner Sub supported its proposal to the state.

The winning proposal sets the sale price of the line at $75 million along with a commitment of the purchaser to bring the Sooner Sub to FRA Class 3 track conditions, which SLWC estimates will cost $2.35 million. SLWC has invested $16 million in the Sooner Sub since 1998 and the railroad plans for an aggressive capital and maintenance program and says it will spend between $2.4 and $2.6 million per year over the next 10 years on the Sooner Sub. SLWC estimates the total cost of capital and maintenance expenditures for infrastructure investment over the next 10 years will be approximately $25 million.

Additionally, SLWC has partnered with Iowa Pacific Holdings (IPH) to continue to explore establishing passenger rail in the state by bringing a daily passenger service between Del City and Sapulpa, eventually working to gain access to Tulsa and downtown Oklahoma City.

With the purchase of the Sooner Sub, the SLWC will maintain its 275-mile Oklahoma network that currently runs from Duke through Lawton, Oklahoma City and Stroud, ending just outside of Tulsa in Sapulpa. Trackage rights through Tulsa allows the SLWC to interchange traffic with its sister railroad, the South Kansas and Oklahoma Railroad, which serves customers in Oklahoma and southeastern Kansas. The SLWC also has a separate line running from Stillwater to Pawnee.

Oklahoma’s process for sale of the line consisted of requesting formal bids that were then reviewed by the Oklahoma Secretaries of Finance, Agriculture, Transportation, Commerce and Energy. Two short listed proposals were then given further consideration through formal negotiation and an economic impact assessment.

“We look forward to working with our customers to meet Oklahoma’s freight and passenger rail needs in the years ahead. We very much appreciate the support we have received from so many people and are committed to going to work to surpass expectations,” added McKechnie.