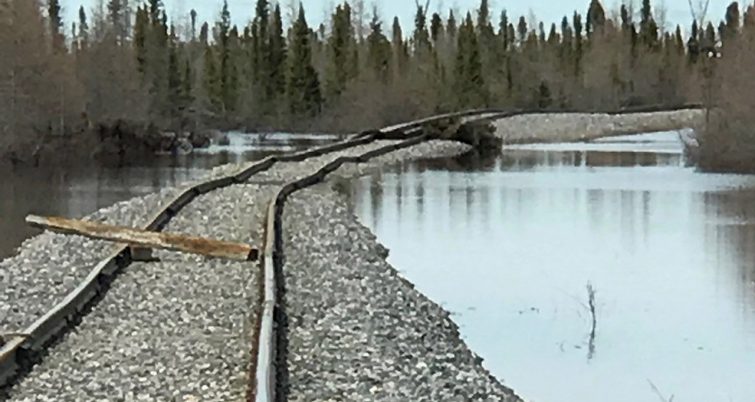 OmniTRAX sold Hudson Bay Railway to a group that is set to repair the flood-damaged railroad.

OmniTRAX has sold northern Canada’s Hudson Bay Railway to a group that will repair the flood-damaged railroad.

The Arctic Gateway Group LP, including Fairfax Financial Holdings Limited of Toronto, AGT Food and Ingredients Inc., and Missinippi Rail Limited Partnership, the last a consortium of First Nations and northern communities, announced that they have reached an agreement with Omnitrax Inc. of Denver to acquire the North Manitoba railroad and facilities at the Port of Churchill.

No purchase price was disclosed.

“Over the past eight months, we have been working diligently with our many partners to come together, develop a business plan and satisfy the principles for successful new ownership of the Hudson Bay Railway and Port of Churchill facilities,” said Paul Rivett, president of Fairfax. “The Government of Canada acknowledges the value and importance of our inclusive group and is supportive of our efforts providing a long-term support package through Western Diversification and Export Development Canada to acquire the assets and implement Phase One of the project which is to repair the rail line, undertake safety and rehabilitation upgrades to the port and the railway assets to efficiently operate freight and passenger services to the Northern communities and the Port.”

Rail service to Churchill and remote surrounding communities was cut off in May 2017 by flooding that damaged portions of the 627-mile railroad.

OmniTRAX, citing costs as high as US$60 million, had balked at making repairs. But in late August it relented and began initial engineering after the Canadian Transportation Agency said it would hold OmniTRAX responsible for fixing the line.

OmniTRAX in late 2016 had entered into a Memorandum of Understanding with Missinippi Rail and One North on a potential sale of the railway for a reported C$20 million ($16.18 million). In November 2017, Fairfax had expressed interest in a partnership with Missinippi Rail and One North to buy the Northern Manitoba rail and port infrastructure. But the talks with the consortium broke down this past May.

Rivett said that the new owners have begun repairs by awarding a contract to Cando Rail and Paradox Access Solutions.

“The time has come for us to work together with our consortium of First Nations and communities, the Government of Canada, the Provinces and the private sector to build an Arctic gateway for Canada to the world,” Rivett said.

He added the deal establishes a foundation to build an Arctic gateway for export and import activities through Canada’s only deep-sea Arctic port.

The deal is structured for Missinippi Rail to have a 50% ownership stake and commensurate board appointments.

“We’ll have control in the future, and we’ll work toward prosperity,” said Mayor Mike Spence of Churchill. “This is historic; I don’t think there’s another model out there in Canada that would fit into this equation. First Nations, Communities and Municipalities and the private sector hand in hand with the Government of Canada. This will work. We are excited for the future.”