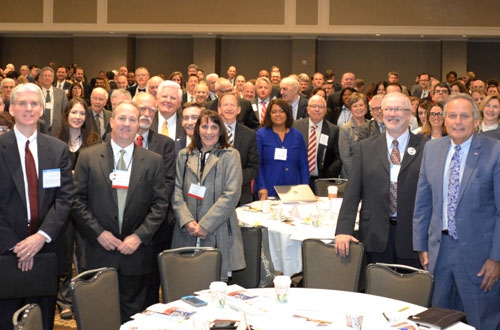 Only a small portion of the 467 participants during Railroad Day on Capitol Hill, March 2.
ASLRRA

A record number of rail industry participants came to Washington, D.C., on March 2, 2017 to take part in the 18th annual Railroad Day on Capitol Hill.

The American Short Line and Regional Railroad Association (ASLRRA) says that the Building Rail Access for Customers and the Economy (BRACE) Act was a key point of discussion for shortline railroaders, who noted close alignment with the administration’s stated interest in spurring private investment in infrastructure through tax credits.
The BRACE Act would permanently extend the shortline tax credit, also referred to as 45G, which provides shortline and regional railroads a 50-cent tax credit for every dollar spent on railroad track maintenance, up to $3,500 per mile of track owned or leased by the railroad. The tax credit has a 14-year track record and has been extended through a series of short-term extension efforts the most recent of which expired on Dec. 31, 2016.

ASLRRA says the BRACE Act removes the need to pass legislation every year in support of the credit, adding predictability to infrastructure investment planning. The association also explains the 45G tax credit has been responsible for nearly $4 billion of private investment in shortline and regional railroads since its inception in 2008. The BRACE Act was reintroduced in both houses in the 115th Congress (H.R. 721 and S. 407). ASLRRA notes that due to the efforts during Railroad Day, the BRACE Act now has 82 cosponsors in the house and 15 in the Senate as of Monday, March 6.

“Hundreds of citizen lobbyists advocated on issues from balanced regulation, to sensible tax reform including permanence of the 45G tax credit that spurs rail investment, to the holding of truck size and weight at current levels,” said Linda Bauer Darr, president of ASLRRA. “Shortline railroads extend the national rail network by connecting rail service to local economies and building jobs in America’s industrial and agricultural heartland.”