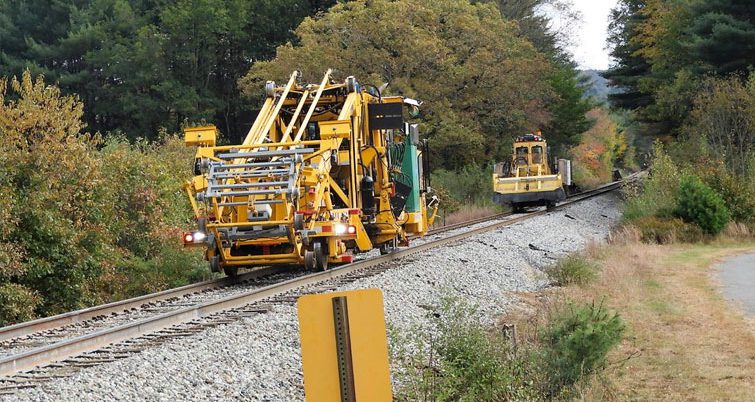 U.S. Rep. Joe Courtney (D-CT-02) visited the New England Central Railroad (NECR) near Stafford Springs, Ct., on Oct. 22, to view progress the shortline has made to upgrade the rail line between New London and Stafford.

This isn’t the congressman’s first visit to the site. In May, Rep. Courtney also attended a ceremonial unloading of steel rails that will be used to upgrade the line.

The state was awarded an $8.2-million Transportation Investment Generating Economic Recovery (TIGER) grant in 2014 that was applied toward rail upgrades along NECR, a subsidiary of Genesee & Wyoming. Rep. Courtney’s office said the project would allow for 286,0000-lb. cars to use the line; doubling the current cargo capacity and significantly increasing the commercial value of the Port of New London. Line improvements include new continuous welded rail, 15,000 new crossties and 15,000 tons of ballast.

”Once this project is finished, it will be a game-changer for eastern Connecticut,” said Rep. Courtney. “Expanding freight rail capacity will help grow the Port of New London, which has been vastly underutilized as a commercial shipping hub. The project has created about 100 construction jobs in north-central Connecticut and was funded in part by a 2014 U.S. Department of Transportation TIGER grant, which was critical in the effort to leverage matching funds from private industry. This project is going to expand industry and create new jobs across eastern Connecticut as shipping increases in the coming years.”

Rep. Courtney’s office noted that the estimated cost of this work is approx. $12.8 million and includes a match from Genesee & Wyoming worth $4.6 million. The current project has come in more than $3 million under-budget and surplus funds will be used to make additional infrastructure improvements along the line.