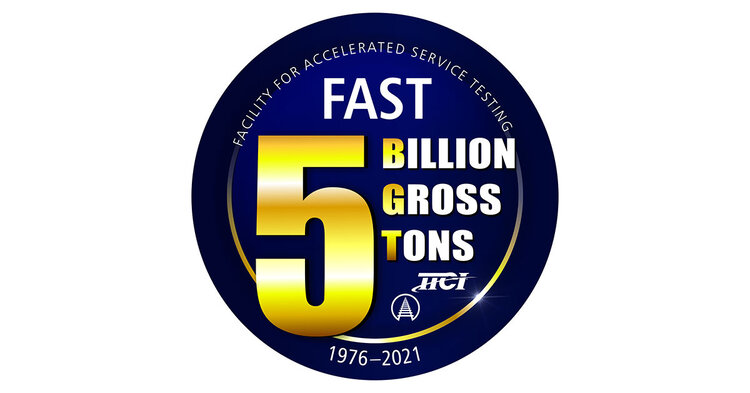 The TTCI has accumulated 5 billion gross tons of freight train loading at its Facility for Accelerated Service Testing (FAST) in Pueblo, Colo.

In the rail industry, gross tonnage is the total weight of trains (cars, the loads in them, and the locomotives included) that move through a territory. TTCI’s landmark accumulation of 5 billion gross tons over a 2.7-mile loop of track is equivalent to taking the current population of the United States (about 331 million people) on a 450-mile train ride.

TTCI’s work at FAST is a full-scale research, development, and testing effort aimed at enhancing the safety, reliability, and efficiency of high tonnage, heavy axle load freight rail transportation in North America and around the world. Maintained and operated by TTCI, a wholly owned subsidiary of the AAR, FAST serves a central role in the AAR’s Strategic Research Initiatives program. The FAST test bed comprises a full-scale loop of track and a fully functional freight train. The record tonnage was accumulated by the test train traveling over the 2.7-mile loop at FAST which currently supports a 114-car train weighing 18,000 tons that accumulates 120- to 140-million gross tons of loading per year.

“The FAST program is one of the best examples of a large-scale industry research program funded by the North American railways that plays a major part in the development and evaluation of innovative technologies,” said Lisa Stabler, TTCI President.

“For the past 45 years, the FAST program has been very successful in facilitating the safe introduction of new technology into commercial service. We are looking forward not only to continuing, but also expanding this critical and impactful program for another 5 billion gross tons,” Stabler said.

The AAR, individual railroads, and railroad suppliers have cooperatively funded and supported operations at FAST and its many and varied test programs. The cars and the locomotives are loaned to TTCI by the AAR member railroads. Rail, ties, bridges, and other components are supplied by industry. The facility offers many advantages for railroad safety and efficiency testing. Operations are closely controlled and varied to suit the needs of each experiment. Comprehensive measurements and observations from the testing support mathematical simulations of track and vehicle systems by supplying the data needed to verify, validate, and calibrate the simulation models.

Dr. Gary Fry, TTCI’s Senior AVP for Research and Development, noted that at its core, FAST is an extreme proving ground for the latest innovations in freight rail transportation.
“The objective is to create a demanding environment, said Fry, “but also a realistic and scientifically-controlled one, under which all manner of freight-railway components and systems can be tested—before they are introduced into commercial service.”