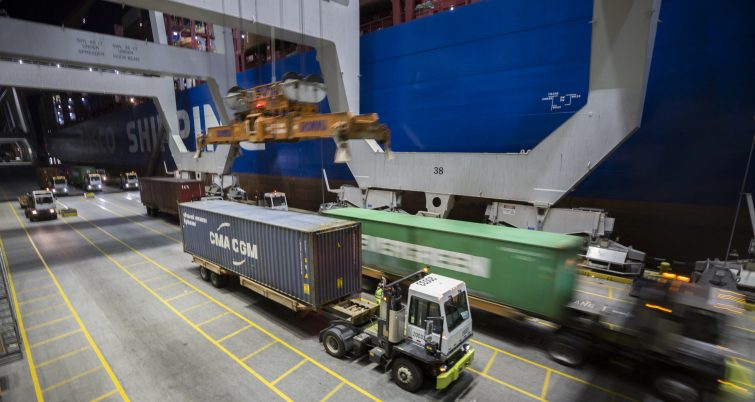 Fuel shortage could impact container operations such as these at Garden City Terminal in Savannah.
GPA Photo/Stephen B. Morton

While this is not a typical RT&S story, the U.S. DOT's efforts to reduce the impact of the Colonial Pipeline outage are worth reviewing.

The fuel shortage brought about by the cyberattack of the major Colonial Pipeline route could have an impact on rail construction projects and container operations throughout the eastern United States. Diesel fuel for trucks and track equipment could be in short supply if the closure continues. Hopefully, the pipeline will be restored to service before any major delays occur, but here is a press release from the U.S. Department of Transportation on alternatives the agency is working on with various modes of transport.

“The Biden-Harris Administration is continually assessing the impact of the ongoing Colonial Pipeline incident on fuel supplies for the East Coast and is monitoring reported shortages in parts of the Southeast. This ongoing effort includes evaluating resources the federal government can mobilize to mitigate potential impacts.

“As part of this process, the U.S. Department of Transportation (U.S. DOT) has started the work needed to enable consideration of a temporary and targeted waiver of the Jones Act.

“[Yesterday], U.S. DOT’s Maritime Administration (MARAD) initiated a survey of Jones Act-qualified vessels to begin the process of evaluating what assets are available in the Jones Act fleet to carry petroleum products within the Gulf, and from the Gulf up the Eastern Seaboard. This step is being taken to determine whether there is sufficient capacity on Jones Act-qualified vessels to carry the product and to determine if a waiver is warranted. Responses have been requested today.

“The Maritime Administration’s role in the Jones Act waiver process is to determine the availability of Jones Act vessels to carry the products for which a waiver is sought. Authority to receive requests for and to approve waivers to the Jones Act belongs to the Department of Homeland Security.

“U.S. DOT’s top priority is safety, and while current circumstances dictate providing industry flexibility, FMCSA will work closely with its state and industry partners to monitor driver work hours and conditions for the duration of the exemption.

“In addition, U.S. DOT’s Federal Railroad Administration (FRA) is canvassing rail operators to determine their capacity to help transport fuel from ports inland and if there are additional steps FRA could do to help them increase capacity to do this.  They are also engaging industry to identify trends indicating capacity pressures.

“U.S. DOT’s Pipeline and Hazardous Materials Safety Administration (PHMSA) assisted Colonial Pipeline’s efforts to get Line 4 up and running yesterday on a manual basis and is continuing to support efforts to ensure safe movement of fuels manually, while concurrent efforts to restore the system’s operation continues.

“Since the weekend, U.S. DOT has been conducting outreach to gather information on how U.S. DOT and our agencies can assist. To date, U.S. DOT senior officials have talked to officials from multiple states and localities. Agency staff have also been in touch with labor, safety, and industry groups. Outreach is ongoing.

“This situation continues to develop and the Department of Transportation remains committed to assisting wherever it is needed.”