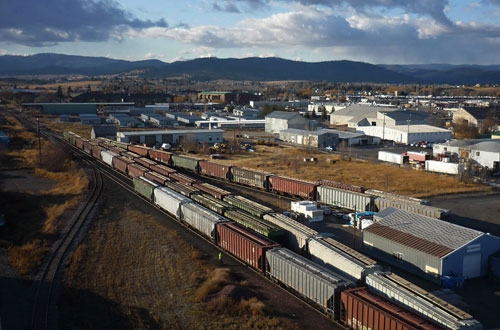 The rail park is part of the larger $21-million Kalispell Core & Rail Development Project, which aims to revitalize Kalispell’s city center by building an industrial park for rail-served businesses and removing railroad tracks that dissected the town. Stakeholders say the project will improve overall traffic flow, walkability and bikeability of Kalispell, which will contribute to economic development of the western Montana community.

The multi-modal facility will include new rail and road infrastructure with every lot equipped with on-site rail, wastewater management, municipal water and utilities. Additionally, rail to the tenant’s buildings can be custom built. Following the rail park’s construction and rail line relocation, tracks will be removed from downtown Kalispell and replaced with a trail

The project was a recipient of a 2015 Transportation Investment Generating Economic Recovery (TIGER) grant. In the U.S. Department of Transportation’s fact sheet on grant award winners it wrote the following on the project:

Developed with extensive stakeholder input and comprehensive planning, this project will eliminate a barrier to transportation in the downtown area and create a new multimodal facility, providing greater mobility for bicyclists and pedestrians throughout downtown Kalispell. These improvements will reduce truck traffic and eliminate an existing barrier to emergency services that occurs when trains block at-grade rail crossings in the city. Additionally, the risk of collisions between vehicles and non-motorized travelers will be greatly reduced. The relocation of the rail infrastructure to Glacier Rail Park will maintain local freight access to the national rail network while improving quality of life in downtown Kalispell.

City of Kalispell Mayor Mark Johnson called the groundbreaking ceremony a “truly transformative moment” noting that the project went through three rounds of TIGER grant applications, a process that tested stakeholders faith, but the successful awarding of the grant made the project possible.

U.S. Sen. John Tester (D-Mont.) said in his address at the groundbreaking ceremony that he is committed to finding a bipartisan solution to preserve TIGER funding, noting that the expenditures made possible through TIGER drive economic growth.