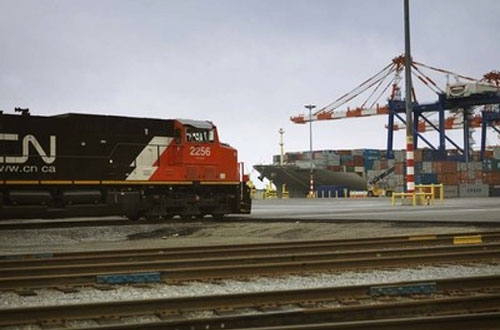 The Port of Prince Rupert in British Columbia, Canada, celebrated the completion of the two-year "Phase 2 North" expansion of DP World's Fairview Container Terminal with a ribbon cutting ceremony.

The expansion project grows the terminal’s annual throughput capacity from 850,000 to 1.35 million twenty-foot equivalent units (TEUs) and allow the port to accommodate the largest container vessels in the world.

The container terminal opened in 2007 at the western terminus of Canadian National’s three-coast transcontinental network and provided weekly service from Cosco. Since its conversion from a break-bulk facility, Fairview Container Terminal has been recognized as one of the fastest growing container terminals in North America.

CN notes that the partnership between the port, Fairview terminal and the governments of Canada and British Columbia created a congestion-free gateway to growing markets across Canada and the United States. Today, the world’s major steamship companies call on the port and with more than 15 trains a week from Rupert, which accounts for about 20 percent of CN’s intermodal business.

“The city of Prince Rupert was built for Canadian trade and the container terminal unlocked so much of the port’s untapped potential,” said Luc Jobin, president and chief executive officer of CN. “As one of the fastest growing ports in North America, the Port of Prince Rupert holds a premier place on the global trade map. The last decade of supply chain collaboration between the port, terminal operators, CN and other partners has become the model for how to establish and grow a trade corridor.”

DP World’s expansion of the Fairview terminal has added 500,000 TEUs to the facility. CN, working with its supply chain partners, is committed to selling 80 percent of the new capacity within three years.

“Congratulations to the Port of Prince Rupert and DP World,” Jobin said. “We look forward to continuing our successful partnership as the port evolves and we facilitate the growth of our customers’ import and export markets.”