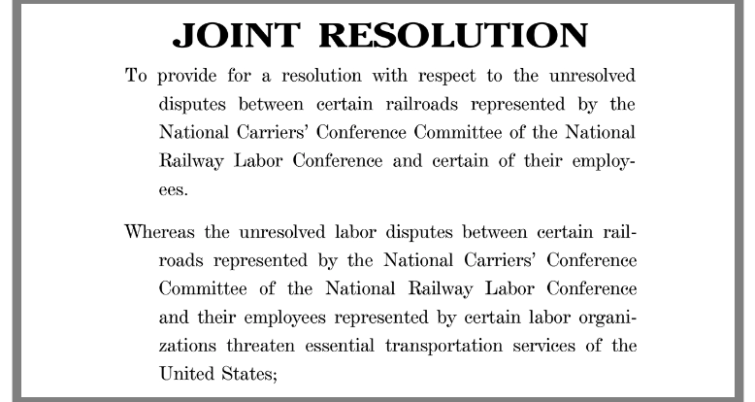 There will not be a rail strike Dec. 9 and unionized rail workers will not gain from Congress an unfunded mandate of seven railroad-paid sick days annually.

WASHINGTON – It seems that the long, arduous battle between labor and management that’s been underway for months has finally been resolved. My Railway Age colleague Frank Wilner has been doggedly following the details of this dispute, and has prepared a strong and insightful piece originally published on the Railway Age website. We’ve posted the most important parts of Frank’s piece below. No matter what your role in the rail industry, including engineering and infrastructure work, this labor agreement is critical to keeping the industry moving going forward, which impacts everyone. David C. Lester

The Senate also defeated—by a 69-26 vote—an amendment offered by Sen. Dan Sullivan (R-Alaska) to extend the status quo (no strike, no lockout) another 60 days and send the parties back to the negotiating table.

The House-passed paid sick leave resolution was defeated by not achieving a 60-vote threshold to avoid a filibuster. It attracted only 52 affirmative votes and 43 “nays.” The lone Democrat voting “no” was Joe Manchin of West Virginia. Six Republicans—Mike Braun of Indiana, Ted Cruz of Texas, Lindsay Graham of South Carolina, Josh Hawley of Missouri, John Kennedy of Louisiana and Marco Rubio of Florida—voted in favor.

The House-passed resolution to impose the Tentative Agreement was approved by a 80-15 vote.

The House and Senate passed resolution imposing the Tentative Agreement now goes to the White House where President Biden said he will sign it into law.

By a 290-137 vote, the House of Representatives Nov. 30 passed a resolution (H.J. Res. 100, downloadable below) to head-off a threatened rail work stoppage Dec. 9 by imposing on railroads and their 12 labor unions a Tentative Agreement amending wages, benefits and work rules. There were 79 Republicans voting “yes” and eight Democrats voting “no.” The eight Democrats were Judy Chu, Mark DeSaulnier and Norma Torres of California; Jared Golden of Maine; Donald Norcross of New Jersey; Mary Peltola of Alaska; Mark Pocan of Wisconsin; and Rashida Tlaib of Michigan.

A second resolution (H. Con. Res. 119, reproduced below), amending the Tentative Agreement by adding seven days of paid sick leave, passed by a vote of 221-207. This second resolution gives labor and management 30 days to agree on contract language implementing the seven days of paid sick leave, with failure to agree on implementation requiring binding arbitration superintended by the National Mediation Board (NMB). There were three Republicans voting “yes”—Don Bacon of Nebraska, Brian Fitzpatrick of Pennsylvania and John Katko of New York—and 0 Democrats voting “no.”

Both House-passed resolutions—with resolutions having the same effect as legislation, and each applying to most Class I railroads and their 12 labor unions—now proceed to the Senate where passage will be trickier, owing to that chamber’s unique parliamentary rules.

Collective bargaining between the National Carriers Conference Committee (NCCC), which represents railroads, and the 12 rail labor unions began in January 2020. Under provisions of the Railway Labor Act, railroad wage, benefits and work rules contracts never expire, but are periodically amended.

Failure to reach an agreement through collective bargaining—even with mediation assistance of the NMB—led to creation of a Presidential Emergency Board (PEB) that made non-binding settlement recommendations. Those recommendations resulted in carrier-provided sweeteners to their previous offers and acceptance by eight of the 12 unions. The failure of four unions to ratify the Tentative Agreement triggered a strike deadline of Dec. 9 and the current congressional attempt to prevent such an economy-jolting nationwide rail shutdown from occurring.

Initially, and at the urging of President Joe Biden, House Speaker Nancy Pelosi advanced only H.J. 100, which was limited to imposing legislatively the Tentative Agreement, with no changes, as if it had been ratified by all 12 unions. Many House Republicans indicated their support.

But on the evening before a scheduled House vote on H.J. Res. 100, Pelosi created a significant new wrinkle that embraces what previously was seen as a Hail Mary by Sen. Bernie Sanders (I-Vt.). That second resolution is strongly opposed by House Republicans, explaining the wide margin of victory for H.J. Res. 100 (including 79 Republican “yes” votes) and the slim margin of victory for H. Con. Res. 119 (the paid sick leave provision, gaining only three Republican “yes” votes).

In the Senate, Majority Leader Chuck Schumer (D-N.Y.) will seek “unanimous consent” (UC) to send the two separate House-passed resolutions to the Senate floor for vote, where each will need only 51 votes for passage. In fact, passage needs zero Republican votes if all 50 Democrats vote “yes” and Vice President Kamala Harris casts the 51st vote in her role as President of the Senate. Some Republican “yes” votes are expected.

Significant is that if any senator objects to UC, Schumer must file what is known as a “cloture petition,” requiring 30 hours of debate and one intervening day, at the end of which there must be 60 votes (out of 100 senators) to advance the House-passed resolutions to the Senate floor for a vote (again, requiring just 51 votes for passage). The rub is whether 10 Republican votes can be found to reach cloture on the paid sick leave resolution.

Another rub is that having to go through the cloture process for even one of the House-passed resolutions will extend Senate action throughout the weekend and perhaps into next week, sending a signal to those shippers who have rail alternatives that a rail shutdown is possible within a few days, and that they should begin diverting traffic to truck.

Passage by the House of the paid sick leave resolution should now satisfy Sen. Bernie Sanders (I-Vt.) who had threatened to object to UC in the absence of a paid sick leave provision.

Sen. Marco Rubio (R-Fla.), however, may object to UC on both resolutions, as he was quoted Nov. 29 that he would oppose congressional attempts at preemptively preventing a work stoppage. Rubio has been bloviating of late that Republicans should make greater effort to attract union members to the GOP. Whether having a paid sick leave provision as part of the Senate floor-vote process quiets Rubio remains to be seen. Of course, 98 other senators have the potential to object and force the delay as cloture is sought.

Based on estimates by the PEB of what a 15-day paid sick leave provision (which the PEB rejected) would cost railroads, the seven-day provision would be equivalent to a 3.3% additional wage increase, or more than $340 million annually. Railroads would seek to recover most of that additional cost from captive shippers.

The Senate is expected to pass H.J. Res. 100 heading off the railroad work stoppage. If the Senate also passes H. Con. Res. 119, adding paid sick leave to the Tentative Agreement, there are several reasons why.

A bottom line is that if the Senate follows the House lead and grants unionized rail workers paid sick leave, it will be a major blow to the image of the Association of American Railroads (AAR), whose lobbying abilities have been celebrated for generations. Already, cracks have appeared in the AAR’s ability to hold back undesired economic regulatory edicts from the Surface Transportation Board (STB), while the Federal Railroad Administration (FRA) is poised to impose a minimum crew size requirement over AAR objections.

Key takeaways from the Nov. 30 House debate on the two resolutions: