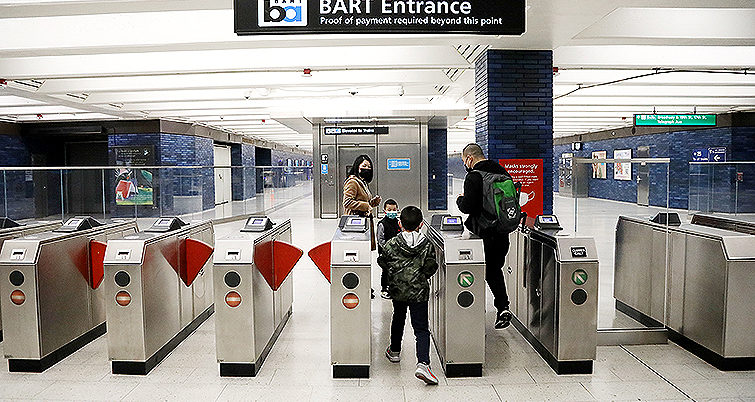 BART celebrated the transformation of its 19th Street Station in Oakland with a ribbon cutting Jan. 21.
BART

Bay Area Rapid Transit commemorated the completion of a multi-year upgrade project at Oakland's 19th Street Station with a ribbon cutting on Jan. 21.

The multi-year upgrade effort resulted in an open concourse with numerous aesthetic changes, according to BART.

“The new energy efficient lighting, combined with new public art installations, have brought a glow to the blue brickwork of this iconic station,” said BART Director Robert Raburn. “The improvements have not only changed the look of the station but also the feel.”

The concourse was renovated to combine three paid spaces into one continuous paid area, and hidden corners were eliminated by using glass barriers instead of brick. Upgrades also include repaired terrazzo flooring and ceramic wall tiles, a new north-end elevator and the addition of bike channels, a release said.

The project also included the refurbishment and re-opening of the concourse-level public restrooms, which will be completed in February 2022.

As part of the larger GO Uptown project with the City of Oakland, the renovations were funded by State of California Proposition 1B funds, BART Measure RR funds, Caltrans (STIP) funds, Alameda CTC Measure BB funds, and a Federal Department of Transportation TIGER Grant.

The design team’s overriding concept was Uptown Oakland’s artistic history. The curtain pattern featured in the glass and metal barriers around the concourse, the feature lighting, and the gold ceilings all mirror these aspects, according to BART.

The phone alcoves have been converted into movie-kiosk-style displays with rotating artworks. Studio1500 of San Francisco, led by Julio Martinez, created the original artworks.