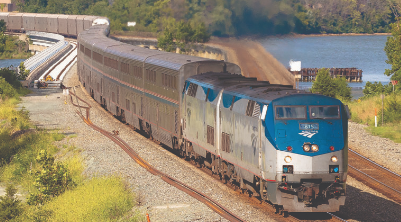 Amtrak has aspirations of setting a line that would run between Las Vegas and Los Angeles.

Safe bets usually do not produce huge returns in Las Vegas, but it might be different in the case of high-speed rail.

Brightline West CEO Mike Reininger said he is certain construction of a Las Vegas-to-Los Angeles route will begin in a matter of weeks. However, he did not release an exact date.

Election uncertainty, the lack of a COVID-19 vaccine approval, and the lack of liquidity in the stock market interfered with Brightline’s attempt to sell private activity bonds allocated for the project by the U.S. DOT and the state of Nevada and California to pay for construction. The project made a hard stop in late 2020.

However, Reininger said the tenor of the market today is dramatically different. He said the stock market is doing incredibly well, people are optimistic about a massive rebound in the economy, and jobs are headed in the right direction.

Those factors are making the construction start a reality in late second quarter, but there already may be some competition. Amtrak has suggested it might create a Las Vegas-to-Los Angeles line if President Biden is successful with his $2 trillion infrastructure plan. Amtrak would use $80 billion in funding to make a long list of repairs, including modernizing existing rails, and make new city connections. New service would be added to major cities that are without Amtrak service, including Las Vegas, Nashville, Columbus, Ohio, and Phoenix.

Reininger said he would welcome a second line between Las Vegas and Los Angeles.