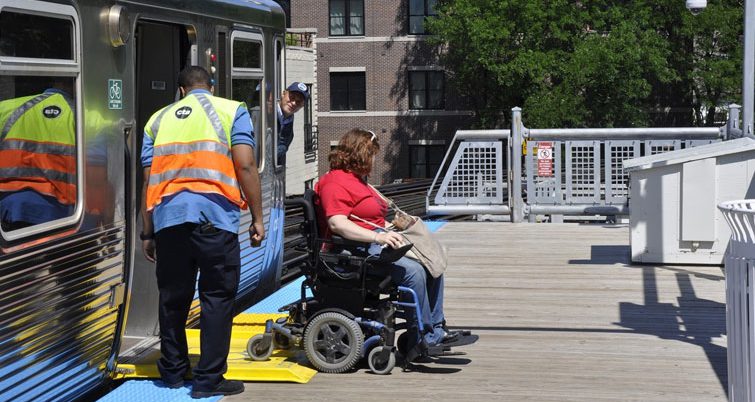 Dorval R. Carter, Jr., president of the Chicago Transit Authority (CTA), Chicago Mayor Rahm Emanuel and the Mayor’s Office for People with Disabilities recently announced a plan to make the CTA 100 percent accessible throughout the next 20 years.

The CTA’s All Stations Accessibility Program (ASAP) Strategic Plan outlines the agency’s proposed strategies to improve accessibility through modernization efforts at 42 stations that currently are not accessible by a wheelchair.

“The ASAP Strategic Plan is our blueprint for getting there and we can now move forward more aggressively with our modernization planning and our efforts to seek project funding,” Carter said.

The plan also lays out future upgrades or replacement work for 162 existing passenger elevators throughout the system.

Following the passage of the Americans with Disabilities Act (ADA) in 1990, about 6 percent of the CTA’s rail stations met the accessibility standards outlined in the legislation.

After the December 2009 completion of the Brown Line Capacity Expansion Project, the CTA became compliant with what is known under the ADA as “key” station upgrade requirements.

All CTA trains and buses are now wheelchair accessible, CTA said, and 71 percent of all the agency’s rail stations are accessible via elevator or ramp.

“By ensuring that every CTA station in Chicago is accessible to all Chicago residents, we are creating a world-class transit system that make public transportation a convenient and viable choice for everyone,” Emanuel said. “The investments we are making in the CTA will benefit Chicagoans of all abilities for generations to come.”

In 2018, crews are set to complete work on the historic Quincy Loop Elevated station which is receiving new elevators, the agency said.

“The All Stations Accessibility Program gives life and a roadmap to our commitment to ensure everyone has equal access to public transportation options across Chicago,” said Karen Tamley, commissioner of the Mayor’s Office for People with Disabilities. “I am proud to work with the CTA and Mayor Emanuel as we take action to ensure individuals with disabilities are afforded the same opportunities to travel, work and thrive in a world-class accessible city.”

Modifications proposed for the remaining 42 inaccessible stations include:

CTA noted that upgrading the rail system is a complex project due to many of the stations in need of improvements having been built 50 to 120 years ago, when escalators, elevators and related amenities were not yet standard station components.

The ASAP plan will be updated as the CTA begins planning and construction work, officials said.

Currently, only some of the work included in the plan’s first phase is funded. There is also no dedicated funding for future phases of the plan.

CTA said the agency will continue seeking funds for the improvements from local, state and federal sources, as it does with all capital projects.

More information on the ASAP plan is available here.