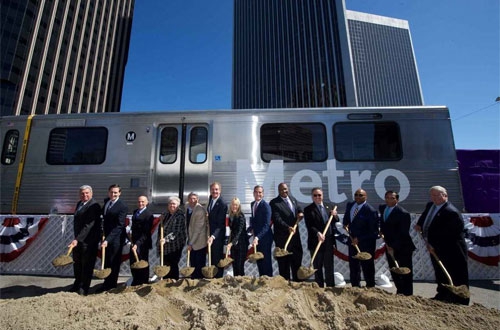 Local, state and federal officials joined the transportation authority for the milestone event in celebration of the expansion that will add 2.6 miles of new passenger service to downtown Beverly Hills and Century City.

“Angelenos deserve a world-class transportation system that takes the burden off their commutes, connects people with our countless sights and attractions and makes Los Angeles a more accessible and sustainable City,” said Los Angeles Mayor Eric Garcetti, who also serves as LACMTA Board Chair. “Today’s groundbreaking is a clear indication that this project to link downtown L.A. to our region’s second-largest job center is on time and on budget.”

Major construction activities are scheduled to begin in spring 2018, and crews are expected to create a launch area for a tunnel boring machine at the anticipated Century City/Constellation Station.

Major work at the planned Wilshire/Rodeo Station in Beverly Hills is set to launch in late 2018 or early 2019, LACMTA said.

LACMTA has kicked off construction on the first segment of subway for the project, which stretches four miles between Wilshire/Western in Koreatown and Wilshire/La Cienega in Beverly Hills.

The first segment being worked on is now 30 percent complete, and LACMTA said the portion of the project is scheduled to open in 2023.

The project’s second section is set for completion in 2025, with the final section from Century City to Westwood/VA Hospital set to launch service in 2026, officials said.