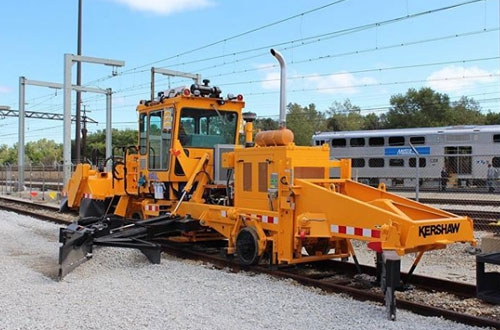 A ballast regulator at work
Metra

The commuter railroad has planned major projects to replace declining bridges along its UP North and Milwaukee District West lines, as well as plans to build new track portions on the UP West Line.

Some of the planned work began during the first week of April and will continue through the fall, depending on weather conditions, officials said.

“We plan to take full advantage of the construction season by making improvements where we can with our limited funding,” said Jim Derwinski, Metra’s CEO and executive director. “Our goal is to be as efficient as possible with the resources available to maintain our rail system and to move forward with the upgrades necessary for the implementation of the Positive Train Control safety system.”

Some of the work will be taken on by Metra’s in-house crews, while contracted construction firms are set to handle larger projects.

Metra’s 2018 capital program outlines $84.8 million that has been allocated for the following types of projects:

Additional funding for some of the projects was allocated in previous capital programs or came from outside sources, officials said, such as municipalities and Metra’s freight railroad partners.

Metra and its partners aim to replace about 92,000 crossties this year, officials said.

BNSF will replace about 12,000 crossties on one of its main tracks between Hinsdale and Aurora, as well as resurfacing mainline track from Downers Grove to Aurora.

Metra said it began work to replace 17,000 ties from Fox Lake to Libertyville on its Milwaukee District North Line during the first week of April. The work will also include the continued upgrade of the signal system on this section of track in preparation for PTC implementation, Metra said.

On the Metra Electric Line, the railroad will replace 10,000 ties on the South Chicago and Blue Island branch lines beginning in May. Another 10,000 ties will be installed on the Rock Island’ Beverly Branch Line later in the summer, officials said.

Union Pacific Railroad (UP) also plans to resume or begin several projects in 2018. On the UP West Line, work will continue on two multi-year projects to add eight miles of third track to remove bottlenecks that are a significant source of delays. The two projects combined will cost more than $100 million, Metra said, and funding is being provided by UP and Metra.

UP also intends to replace 43,000 ties on the UP West Line as part of its general maintenance program.

Metra has also planned several improvements for bridges, including 15 on the Milwaukee District West, Metra Electric and UP North lines.

Crews began work in the fall of 2017 along the Milwaukee District West Line on a $34 million multi-year project to replace a 130-year-old single-track bridge above the Fox River in Elgin with a double-track bridge. Part of the project is funded through a $14 million federal Transportation Investment Generating Economic Recovery grant, with the remaining funding supplied by Metra and Canadian Pacific.

Along the Metra Electric Line, Metra will rehabilitate its bridges at 63rd and 64th streets in a $1.2 million project that will involve the removal and replacement of deteriorated concrete from the bridge abutments and the underside of the bridge decks.

Along the UP North Line, Metra plans to continue a $45 million, multi-year project to replace 11 bridges for the inbound tracks over several streets.
As U.S. railroads nationwide are ramping up their efforts to meet the federally-mandated implementation deadline for PTC safety systems, Metra said its crews are upgrading signal and communications systems on each of the lines it controls.

Metra also has plans to make improvements to 21 road crossings systemwide in 2018, including in communities such as Downers Grove, Chicago, Grayslake, Brookfield, Medinah, Elgin and more.

Metra Electric Line – Complete of a $9.3 million project to upgrade the signal system at the 11th Place interlocking

Rock Island Line – Upgrade the signal system and crossing circuitry on the Beverly Branch for PTC compatibility, upgrade interlockings at Gresham and near the Brainerd Station on the Beverley Branch and upgrade crossing circuitry at 139th Street near the Robbins Station. Metra will also install two new control points and renew control points, well as renewing the EJ&E interlocking in Joliet.

SouthWest Service Line – Complete an upgrade of the signal system at an interlocking near 74th Street in Chicago, which is estimated to cost $1 million

Metra has also planned improvements for 30 of its 242 stations in 2018. Aside from painting and general repair projects, the railroad has plans to complete a $3 million project to renovate its Hazel Crest Station and a $2.95 million renovation of the concourse at the LaSalle Street Station in Chicago.

The Cumberland Station along Metra’s UP Northwest Line will also be renovated and a $2.4 million project at the Cary Station will bring about a new station house.