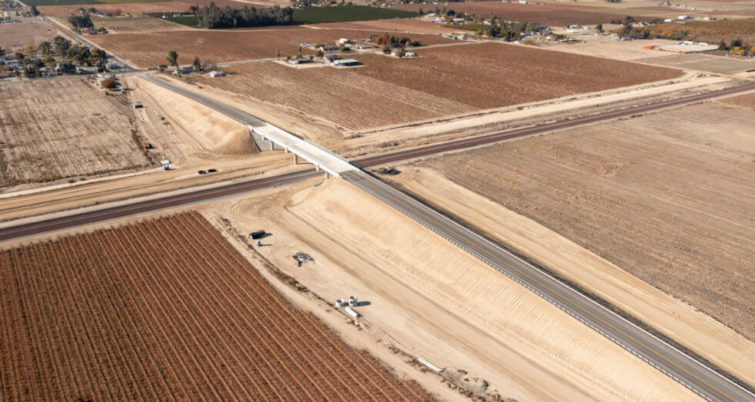 The Adams Avenue grade separation, which is located between Cedar and Maple avenues, south of the City of Fresno, spans 357 feet long, is 40 feet wide and takes traffic over the existing BNSF and future high-speed rail lines.

The Fowler Avenue grade separation, which spans 299 feet and 40 feet wide, will take traffic over the future high-speed rail lines. The structure is comprised of 12 pre-cast concrete girders manufactured at the DFJV Pre-Cast Girder Facility in Hanford.

Throughout 2022, CHSRA says progress has continued across the 171 miles under construction and development, including ongoing progress at the Cedar and Hanford viaducts, and the completion of other high-speed rail grade separations at Kent and Jackson avenues in Kings County, South Avenue in Fresno County, and at Avenue 15 ½ in Madera County.

CHSRA recently announced that the project has created nearly 9,800 construction jobs since work building the nation’s first high-speed rail line began. This includes 3,269 jobs going to residents from Fresno County, 1,826 from Kern County, 977 from Tulare County, 424 from Madera County and 353 from Kings County.