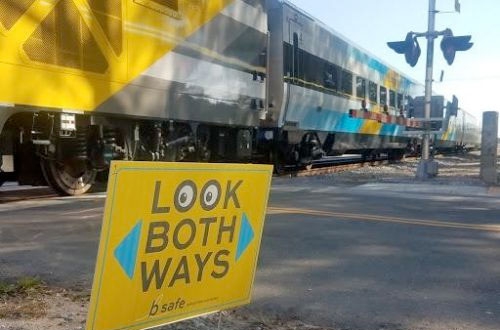 Rail-highway grade crossing accidents, along with pedestrian/trespasser deaths, have been national problems almost since railroads began operating in the U.S. Although the number of deaths has dropped over the past few decades, thanks largely to the efforts of railroads, Operation Lifesaver and law enforcement agencies, there has been a spike in Florida over the past three years.

4CBSMiami and the Associated Press are reporting that the new Brightline high-speed rail passenger service (which will be rebranded as Virgin Trains USA in the near future) is the deadliest railroad in the country. Over 40 people have been killed since the passenger carrier began running test trains in 2017. While it is not the railroad’s fault, the carrier has been plagued with rail-highway crossing accidents and deaths, suicides, and trespassers being hit and killed when walking along the tracks not realizing a train is coming.

The railroad currently operates on 67 miles of track between Miami and West Palm Beach. Expanding operation to Orlando, 170 miles north of West Palm Beach, is scheduled for 2022.

Patrick Goddard, president of Brightline, says that “this is something we obsess about.” He added that “there is nothing we would want more than for that number to go to zero.”

While Brightline is implementing several measures to reduce the number of accidents and fatalities through deterrents such as fences, motion detectors, camera-equipped drones, and quad crossing gates, they are also working with groups focused on preventing suicide. A grim statistic reported by 4CBSMiami and the Associated Press is that railroad operations in the U.S. kill over 800 people each year, and around 500 are believed to be suicides.

While the impact of these accidents on the train crew is discussed in the 4CBSMiami and Associated Press reports, many reports of rail-highway and trespasser accidents do not address the issue. The striking and killing of people on the tracks or in a vehicle trying to beat the train at a crossing is devastating to the train crew. Many require counseling and, in some cases,   crew members involved in such an accident are not able to return to work.

For the latest rail news, go to rtands.com.