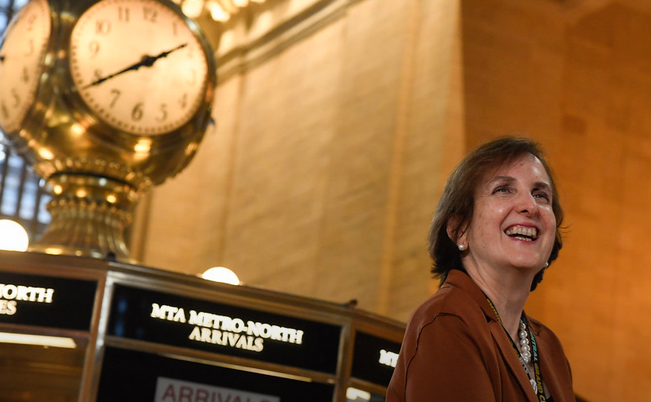 Rinaldi will concurrently serve as President of Metro-North Railroad, a role she has held since 2018. Rinaldi will succeed Phillip Eng, who is retiring after nearly four years as LIRR President.

“Cathy Rinaldi is a proven leader with nearly twenty years of experience at the MTA, having served in leadership positions at headquarters and both commuter railroads,” Lieber said. “At Metro-North, she has led efforts to improve system reliability, achieve excellent customer service, and continue the intensive infrastructure work essential to maintaining system safety. She has great relations with labor, has the respect of her staff and puts the customer first. Phil has done an incredible job as President of the LIRR, strengthening operations through the LIRR Forward Plan and overseeing historic infrastructure investments like East Side Access and Third Track – all the while navigating a once-in-a-century crisis with COVID.”

In addition to Rinaldi’s roles at both the Long Island Rail Road and Metro-North, she has served as MTA Deputy Executive Director and General Counsel, and Chief of Staff and Counsel at MTA Headquarters.

As Interim President of the Long Island Rail Road, Rinaldi will oversee the expansion of Long Island Rail Road service. Most critically, this includes the opening of Long Island Rail Road service to Grand Central Terminal later this year, the culmination of the East Side Access project. This expansion also includes running new service made possible by the recent addition of a third track between Floral Park and Hicksville on the busy Main Line, increasing capacity to run trains in both directions throughout the day. Paired together, these investments enable more frequent service to more destinations, improving travel options for both Long Islanders and commuters throughout the region.

An engineer with deep background in infrastructure and construction, Eng joined the MTA in 2017 following a distinguished career at New York State Department of Transportation where he rose to the rank of Executive Deputy Commissioner. At MTA, Phil served as Chief Operating Officer and then concurrently as Acting President for New York City Transit, before being named LIRR President in 2018.

“I can retire knowing that I leave the LIRR well positioned for continued success with a dedicated management team and a tenacious workforce who are delivering the best train performance in LIRR history while fulfilling our commitments on a historic capital program,” Eng said. “I will always fondly look back on my time working with the MTA family as one of the highlights of my career. The MTA is the backbone of New York – and I will always cherish the opportunity I had working alongside our hardworking, dedicated workforce.”

“Phil Eng leaves the LIRR with significant accomplishments that have improved the lives of commuters and Long Islanders. He and his team excelled even through the nation’s worst health crisis. Under his leadership, the LIRR has the best on time performance in its history and is close to finishing major expansion projects like Third Track and East Side Access,” said Gerard Bringmann, MTA Board Member and Chair of PCAC and the LIRR Commuter Council. “Cathy Rinaldi is an excellent choice to step into this tough job. She knows the LIRR because she worked there, and she knows the key issues facing commuters and railroads as we emerge from the COVID crisis. She is no stranger to major projects, as Metro-North is undertaking significant capital work, and with East Side Access coming into Grand Central, the marriage of these two roles at this time makes sense. We look forward to working with her in her new role on behalf of riders from Wassaic to Montauk.”