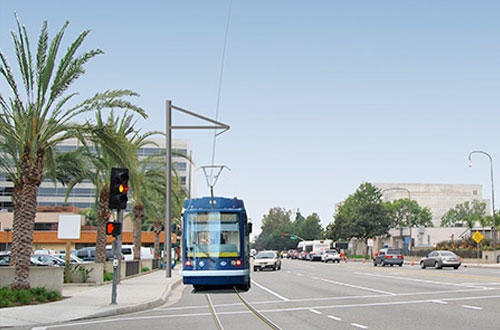 Representatives say the FTA’s review of the project targeted ridership projections and OCTA’s financial commitment to the streetcar project, as well as evaluating the transportation authority’s ability to construct and operate it.

OCTA says the engineering stage is the project’s final phase before the transportation authority pursues a full funding grant agreement from the FTA. Such an agreement could fund as much as half of the $298 million OC Streetcar project, officials say.

Crews are set to begin construction on the OC Streetcar in 2018, and testing and operations work is expected to start in 2020.

“Orange County is ready and eager to get its first streetcar and this is significant progress,” said OCTA Chair Michael Hennessey. “When the streetcar is up and running, it will help provide better options for people to get out of their cars and use public transportation, whether it’s to get to work, to school or to a business meeting.”

The OC Streetcar will run along a 4.1-mile route from the Santa Ana station, through Santa Ana Boulevard and Fourth Street and on the Pacific Electric right-of-way to Harbor Boulevard in Garden Grove. The route will serve the downtown area of Santa Ana and connect with 18 OCTA bus routes and the Metrolink commuter rail system. The line is set to transport up to 7,500 passengers daily within its first year of operation.

Last year, the OC Streetcar project joined the FTA’s New Starts program, and received $125 million after being included in the President’s 2017 fiscal-year budget.

Additional funding is being allotted from the state and from local sources, including Measure M, the county’s half-cent sales tax intended to support transportation improvements.

OCTA’s board is scheduled to consider purchasing streetcars to operate on the OC Streetcar tracks later in 2017. The transportation authority released a request for proposals in December 2016 for the eight streetcars the system will need. The deadline for firms to submit a proposal to provide the streetcars is April 28.