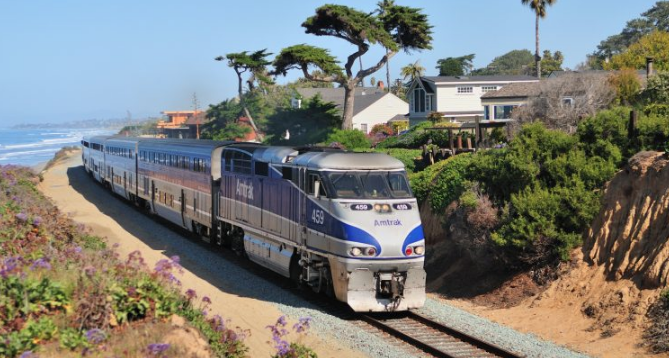 There's a small bright spot in the ongoing saga of the erosion of the southern California coast, and the impact on rail lines and rail service.

According to the Orange County Register, the Orange County Transportation Authority (OCTA) says that trains should be returning to the track running through San Clemente in February. This OCTA report was made to the California Coastal Commission last week.

Readers may recall that passenger service was temporarily suspended this fall as engineers discovered that the rail line, as well as the ground under it, had shifted. This created major concerns about passenger safety on this portion of the line.

Work has been underway to place boulders, called rip rap, on the ocean side of the tracks along the beachfront to protect against waves and storms. Not only has OCTA added boulders to the beachfront, large steel anchors are being driven into the bedrock of land opposite the ocean side to help stabilize the ground. Readings had been stable until the arrival of Hurricane Kay this fall, which brought large swells and heavy rain that eroded some of the boulders, and the land shifted again.

Railway Track & Structures has been covering this story over the past couple of years, and will continue to do so as events warrant.

Read more articles about the impact of California coast erosion on the railroad.