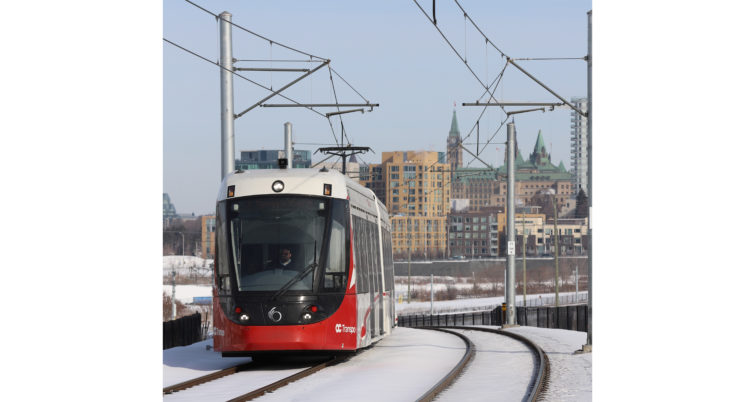 Transportation officials in Ottawa say the city’s light rail system will not be fully operational until at least Jan. 10.
OC Transpo

After weekend efforts to restore full service along Ottawa's light rail system, OC Transpo, in time for Monday's return to work and school failed, officials said the system will not be fully operational until at least Jan. 10.

Some trains have been halted after an ice storm hit the city overnight on Jan. 4 and Jan. 5, damaging overhead power lines, according to a local news report.

“I appreciate these past few days have been difficult for you and restoring full Line 1 services has taken longer than expected,” said Renee Amilcar, OC Transpo general manager, at a Jan. 8 press conference. “We are doing everything we can to provide you with the best possible service under these challenging conditions.”

The light rail system was operating in two loops on Monday morning, one in the west from Tunney’s Pasture to the University of Ottawa and one in the east from Blair to St. Laurent. Amilcar wrote in a memo Jan. 9 that trains were arriving every five minutes, according to a news report.

The partial shutdown due to the ice storm is the latest setback for the system, which debuted in 2019. In November, Justice William Hourigan issued a damning final report on the Ottawa Light Rail Transit Inquiry, alleging that the public was deliberately misled about problems with the system while it was being built and that it was rushed into service.

On the evening of Jan. 8, two trains were towed off Track 1. Overnight on Jan. 8 and again on Jan. 9, workers manually cleared ice and repaired wires on Track 2.

Hourigan stated in his report that the train should have been tested in real-world winter weather conditions rather than lab simulations, as was done with Ottawa’s system.

Experts from the city and light rail manufacturer Alstom were scheduled to meet on Jan. 9 to determine the safety of the overhead catenary system and to discuss the lessons learned. Experts are also expected to discern whether de-icing or other technology could be used ahead of time to prevent future stoppages due to freezing rain.

OC Transpo said the agency will have representatives present at stations to direct passengers and answer questions.