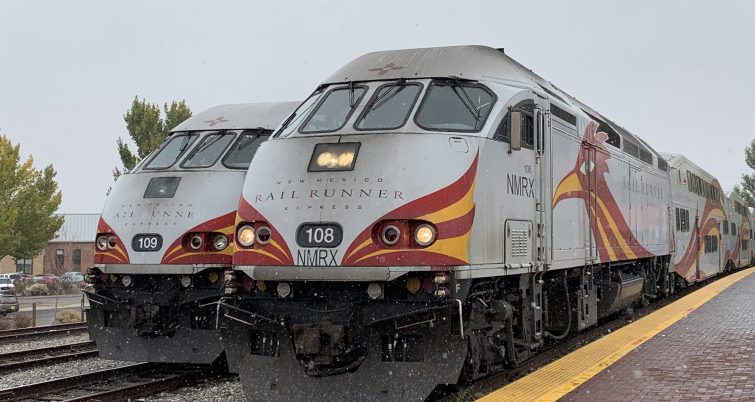 New Mexico’s Rio Metro Regional Transit District, also known as Rail Runner Express commuter rail system is running several trains per day during the COVID-19 pandemic. However, there are no passengers on the trains. Service has been suspended indefinitely until there is either a major improvement in or complete resolution for the coronavirus.

Rail Runner continues to run trains so the engineers and conductors can keep their skills up, test and correct any issues with the road’s new Positive Train Control (PTC) system, and to keep the equipment moving and serviced.

Rail Runner operates commuter trains between Santa Fe, NM and Belden, 65 miles away. Rail Runner managers were concerned about the train operation’s potential to worsen the virus in towns along the corridor, as well as through the several stops in Albuquerque.

Unlike many systems, though, the lack of fare-paying passengers will have little financial impact on the agency. The Santa Fe New Mexican reports that the majority of Rail Runner’s revenue comes from federal subsidies, and not from the fare-box. Nevertheless, the agency received a $55 million grant through the Coronavirus Aid, Relief, and Economic Security (CARES) Act, which will help avoid any furloughs that could result from losing the approximately $1.5 million the agency collects from the fare-box.

Rio Metro Director Terry Doyle added that during the pandemic, the agency can use capital money to cover daily operating expenses