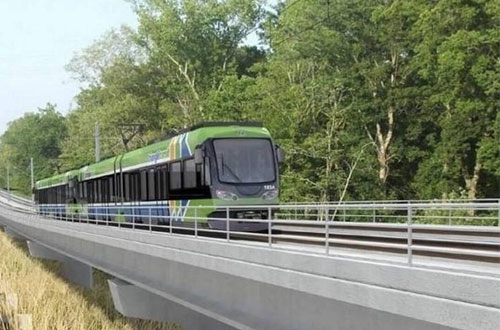 The Durham, NC, city council gave unanimous approval Monday to a proposal to rezone a piece of land in the southwest corner of the city for a light-rail operations and maintenance facility.

The vote moves the controversial Durham-Orange Light Rail Transit a step closer to reality. But problems remain. Some key players in Durham’s economy — including Duke University, the Durham Performing Arts Center and the Durham Bulls Athletic Park — have voiced opposition to all or parts of the planned streetcar system.

Under the plan approved Monday, a facility would be built along Farrington Road to house administration offices, rail car maintenance and storage space. The Research Triangle Regional Public Transportation Authority, known as GoTriangle, chose the location over four others after a series of public meetings in 2015, according to the Herald Sun newspaper.

Before Monday’s vote, 52 people spoke before the city council in opposition to the operations and maintenance facility. Nearby residents have raised concerns about noise levels.

If the light-rail project keeps to schedule, construction will begin in 2020, with estimated completion in 2028. The proposed line would run 18 miles from UNC Hospitals in the west to the campus of North Carolina Central University in the east, with 12 proposed stops along the way. Total cost of the project is estimated to be $2.48 billion. The alignment for the new line will span 16 bridge structures, accounting for more than three miles of track.

In August 2017, GoTriangle chose Omaha-based HDR to lead final design and project management of the system. HDR Transit will design all of the bridges and will lead engineering and architecture for infrastructure along the entire alignment, which includes 18 stations, a parking garage and the maintenance facility. In addition, HDR is leading track design, traffic management, utility relocation, site planning and roadway design. HDR also performed environmental studies and geotechnical engineering in earlier phases of this project.

But keeping to that schedule may prove difficult. The proposed line would cross the campus of Duke University. But the school has so far declined to donate the land needed for the streetcar tracks.

At press time, neither Duke nor HDR had responded to requests from RT&S for comment.