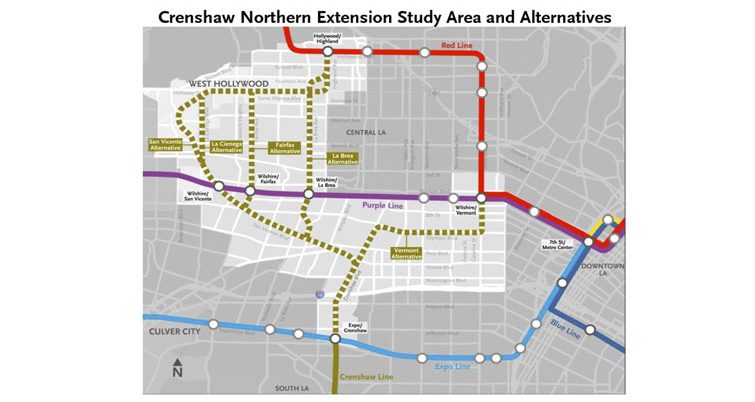 The Crenshaw/LAX Line is currently under construction between LACMTA’s Green and Expo Lines. A northern extension was included under the Measure M spending plan and would run from the Crenshaw Line’s current terminus at the Crenshaw/Expo connection north to LACMTA’s Purple and Red Lines.

Measure M provides $2.33 billion for the extension. However, the feasibility study found all alternatives exceed that threshold. The La Brea option is closest at an estimated cost of $3 billion, the Vermont option is estimated at $3.6 billion, San Vicente at $4.3 billion, La Cienega at $4.4 billion and Fairfax at $4.7 billion.

The staff report on the alternatives recognizes the potential cost overages and states, “Any potential acceleration strategy at this juncture would have to address that factor, either through mitigating cost, securing new revenue or a hybrid of both. To better target project delivery options and a funding strategy, there is a need to conduct broad public outreach and potential further technical study to prepare for a next stage of environmental review.”

The staff report says the cities of Los Angeles and West Hollywood would be consulted to develop a strategy of next steps and staff will return to the LACMTA Board in September with an update.