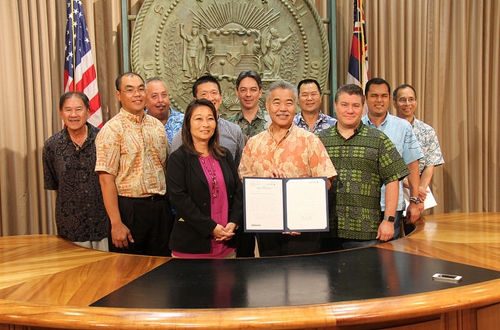 “This is a strategic investment in Hawai’i’s future. We must move this forward and complete this project,” said Gov. Ige.

The bill, Senate Bill 4, was passed by the state legislature during a special session last week. The legislation extends the general excise tax (GET) surcharge and increases the hotel room tax in order to provide the city and county of Honolulu with enough funding to complete the $8.2-billion project. The bill also requires a state run audit of the rail project, as well as annual financial reviews. Local funding now accounts for $7.4 billion of the total project cost.

In December 2012, the Federal Transit Administration (FTA) and the city signed a Full Funding Grant Agreement committing the federal government to providing $1.55 billion for the elevated rail system with 21 stations between East Kapolei and Ala Moana Center. With project cost estimates increasing, transit leaders faced an estimated $2.4-billion funding shortfall and asked FTA to increase the funding commitment to the project. The request was denied and in July, FTA sent a letter to HART asking for an updated financial plan to be submitted by Sept. 15 that showed the funding shortfall would be covered.

Honolulu Mayor Kirk Caldwell praised the bill’s signing and said he was ready to work with city, state and federal partners to update the project’s financial plan and ensure its completion.

“The signing of the rail funding bill into law shows Gov. Ige’s commitment and leadership in completing the rail project as promised to the people of O’ahu…Once fully built this driverless train will add fuel to the economic engine that helps power the entire state of Hawai’i by promoting smart development, generating much-needed affordable housing and creating multi-modal communities that all of us are striving for. The city is working closely with HART on an updated financial plan that takes this new funding mechanism into account…Gov. Ige’s signing of the rail funding bill also allows the Honolulu City Council to approve Bill 45, which extends O’ahu’s half-percent surcharge to the state general excise tax another three years and is a key component of the updated financial plan the FTA requires by September 15. Meanwhile, my administration continues to work closely with our federal, state and city partners on implementing all of the mandates of the rail funding bill, in particular more state oversight of rail construction and the timely transfer of tax revenues to the city,” said Mayor Caldwell.

HART Executive Director and CEO Andrew Robbins, who officially began Sept. 5, the same day the bill was signed into law, said, “Without question, rail will provide numerous benefits for the people of Oahu, the residents of this state and for our visitors for generations to come. This project will serve as a centerpiece for our community and its commerce and I am proud to take the reins to help see this project through to its completion.”