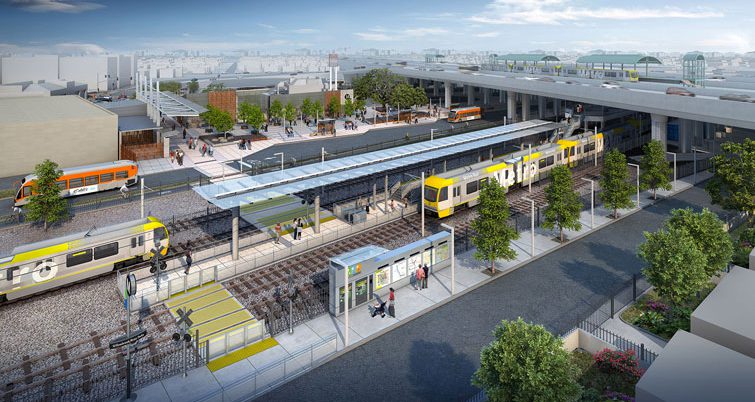 A rendering of the upgraded Willowbrook/Rosa Parks Station.
LACMTA

The station is the fourth-busiest on the rail system and LACMTA says the work will improve access, expand capacity, add community space and better connect the station to the surrounding community.

Among other improvements, the station will have a new Customer Service Center, Transit Security Center, Bike Hub and self-cleaning, automated public restrooms for patrons. The overhaul includes construction of an open-air plaza that has been designed as a public resource to be used for community events, special exhibits, celebrations and movie nights. The $109-million improvement project is funded by a combination of local money and state and federal grants.

“The Willowbrook/Rosa Parks Station has been used by millions of people over the years and it’s time to prepare the station for many more decades of heavy use,” said LACMTA Board Chair and L.A. County Supervisor Sheila Kuehl. “The community deserves a better station and I’m pleased to see this very important work finally getting underway.”

Improvements to the station include:

Early construction work will take place during the rest of this year. In early January, the station will close for eight to nine months as part of the New Blue project to modernize the Blue Line, which opened in 1990. During the closure, rail service to the station will be replaced by bus shuttles.