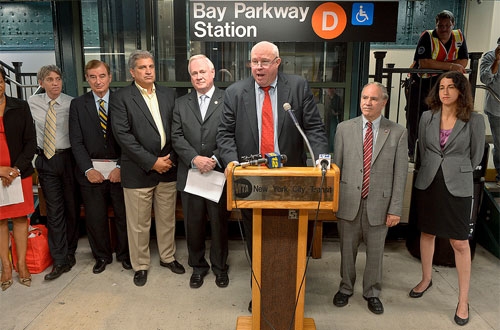 The completion of the work to rehabilitate seven stations along the West End D Line in Brooklyn, N.Y., is now complete.

This seven station, $88 million stimulus project funded by the American Recovery and Reinvestment Act of 2009 brought station elements at the elevated stations and segments of the elevated structure south of 62nd Street into a state of good repair.

Work included the transformation of the Bay Parkway Station into an ADA key station, providing full vertical accessibility for the disabled through the installation of three elevators. One elevator provides access from the street to the unpaid side of the mezzanine and two elevators provide access from the paid side of the mezzanine to the northbound and southbound platforms. The Bay Parkway D Station is the 78th ADA key station in the subway system.

“I take great pride each time we are able to provide our customers with tangible results, modernized stations with updated amenities and the greater ability to serve the disabled,” said MTA New York City Transit President Thomas Prendergast. “I would especially like to thank the 33,000 customers who use these stations every day for their patience and flexibility, as we had to close these stations at times to make repairs.”

Bay Parkway underwent a complete station rehabilitation including new lighting, new platform edges, rehabilitation of stairs, rehabilitation of the control area and new platform windscreens. Bay Parkway also features new prototype free standing pedestal speakers to provide customers with real-time service information. Normally, speakers are integrated in the lighting system, however pedestals are now being used when a station’s canopies do not extend the length of the platform. Bay Parkway is the first station to have these pedestals. The Bay Parkway Station, designated as a Landmark, was restored in accordance with State Historic Preservation Office requirements.

The rehabilitation project also addressed the repair of a substantial amount of structural defects from 63rd Street to north of Coney Island-Stillwell Avenue.

The contract was awarded to Citnalta Construction/Judlau Contracting, JV in August 2009. Rehabilitation work along the West End Line continues under a separate contract for the five stations from 9th Avenue to 62nd Street with completion slated for later this year.