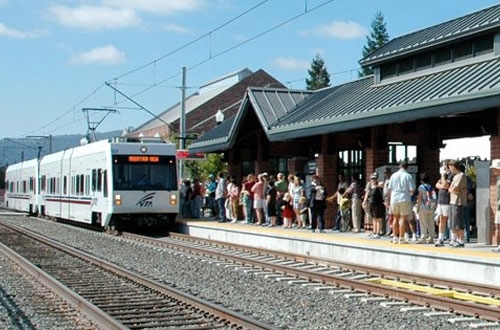 Twenty-five years ago on Dec. 11, a nine-mile, twelve-station light-rail transit line opened its car doors and would become the first of nine segments to offer passenger service in Santa Clara County in California.

The Santa Clara Valley Transportation Authority (VTA), known at that time as “County Transit,” was on its way towards the goal of building a mass transit system that would serve the ever-growing urbanized area, becoming an alternative to the automobile and a driver of economic development.

It began with the federal government supporting that vision with a $2-million grant in 1982 to fund preliminary engineering of the first phase. Construction of the line officially commenced with the light-rail maintenance facility. The Guadalupe Light Rail Division, located in downtown San Jose on Younger Street, was completed in 1986 and is used to store, clean and repair light-rail vehicles. The second phase of construction and first segment of in-street track installation began in 1985. Although the initial tracks only spanned 1.5 miles, they were essential for testing the light-rail vehicles as they were delivered.

“As light rail hits its stride, I know the best years are ahead for our system,” said Santa Clara County Supervisor and VTA Board Chair Ken Yeager. “Like Silicon Valley, light rail has evolved and changed through the decades. As our economy continues to grow, and as we look for ways to reduce congestion and air pollution, light rail is needed more now than ever.”