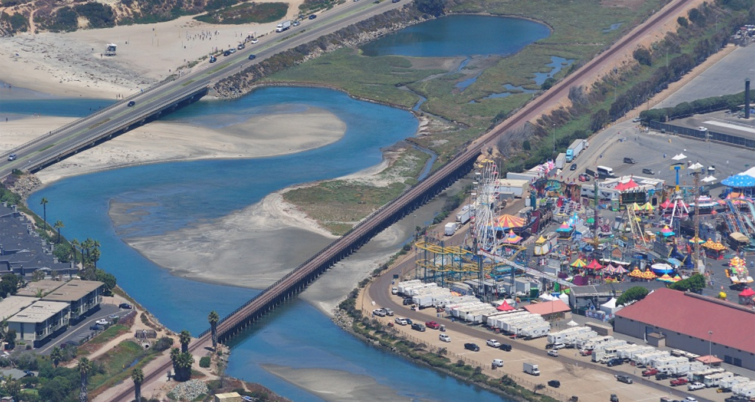 The San Dieguito Double Track and Platform Project is slated to replace the nearly 100-year-old wooden trestle across San Dieguito Lagoon, add about one mile of double track in Solana Beach and Del Mar, and add a special events platform at the Del Mar Fairgrounds, according to SANDAG. (Photograph Courtesy of SANDAG)

North County Transit District (NCTD) and the city of Del Mar, Calif., disagree on how to spend a $300 million grant from the state’s Transit and Intercity Rail Capital Program, according to The San Diego Union-Tribune.

“The transit district recently sent a letter to the San Diego Association of Governments [SANDAG] asking for some of the grant money to be used to finish the long-planned San Dieguito to Sorrento Valley double-track project just north of the bluffs,” according to The San Diego Union-Tribune. “‘The rail realignment off the Del Mar bluffs can only be successful if this time-sensitive project is completed first,’ states the Dec. 16 letter from the NCTD board to SANDAG.”

The newspaper reported that Del Mar officials want SANDAG “to use the entire $300 million to pursue construction of the tunnel and to look elsewhere for the San Dieguito double-track money.

“‘The city of Del Mar expresses strong opposition to the board’s request that SANDAG pursue alternative uses of the $300 million,’ Del Mar Councilmember Terry Gaasterland said on a Zoom call at the transit district’s recent board meeting.

“The grant money was designated for design, engineering and environmental work needed to prepare the tunnel project for construction, she said.”

The newspaper quoted an October letter to NCTD from Del Mar City Councilmember Dwight Worden, who then served as Mayor: “This funding is a major step towards achieving the environmental, financial, feasibility, and design objectives for the rail realignment project. As you well know, the railroad tracks pose a significant threat to the bluffs, structures, commuters, and the public, and this crucial funding will advance the project’s timeline for being shovel ready and competitive for more critically needed funding.”

According to transit officials, the San Dieguito project “is already ‘shovel ready,’” the newspaper reported. “It would add a second set of rails for about one mile [from Solana Beach to Del Mar] and replace the century-old [wooden trestle San Dieguito Railway River] bridge with a wider, double-tracked bridge just north of the proposed tunnel, which also would be double-tracked.”

Also part of the project is the proposed construction a special events platform at the Del Mar Fairgrounds for NCTD COASTER and Amtrak Pacific Surfliner trains.

According to The San Diego Union-Tribune, some 75% of the 60-mile rail corridor between downtown San Diego and the Orange County border has been double-tracked. It noted that the San Dieguito project’s environmental work was completed in 2015, and the project “is ready for construction when money becomes available. Construction costs are estimated at $152 million for the tracks and the bridge, and an additional $82 million for the fairgrounds platform.”

According to the newspaper, the new bridge—eight feet higher than the existing bridge—“is essential to prevent the tracks from being overwhelmed by floodwaters, especially with the expected rising sea levels, and to stop floodwater from entering the tunnel, said NCTD Executive Director Matt Tucker.”

“‘You can’t do the realignment until the San Dieguito project has been done,’ Tucker said. ‘That’s all this item is. This is not a big grab or a steal away from anyone.’”

According to the newspaper, when the $300 million grant from the state’s Transit and Intercity Rail Capital Program was announced, officials said it “would allow SANDAG to complete the preliminary engineering and environmental documents for the realignment project and to start the partially funded final design phase. Money from the grant also was to be used to form an executive task force to help find funds for construction.”

The city of Del Mar and NCTD have been at odds before. They “have been battling for several years over a safety fence NCTD wants to build along the tracks atop the bluffs,” according to The San Diego Union-Tribune. “Del Mar residents say the proposed fence would restrict their access to the beach, obstruct their views of the ocean and lower coastal property values. The transit district says the fence would prevent trespassing on the railroad right-of-way and save lives. Most of the rail corridor already is fenced.

“Negotiations have essentially reached a standstill pending the outcome of a petition the transit district has filed with the federal Surface Transportation Board. If approved, the petition would give the district the authority to build the fence without any permits or other approvals from the city or the state.

“SANDAG and NCTD have been working more than 20 years on a series of Del Mar bluff stabilization projects including seawalls, pilings and drainage structures to protect the tracks on the eroding bluffs until an alternate route can be built.”

Orange County Says Trains May be Back in February