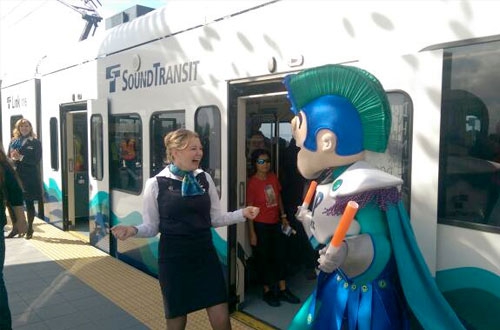 Sound Transit Board Chair and King County Executive Dow Constantine called the Angel Lake station’s opening “another achievement in a historic year for high-capacity light-rail in [the] region,” noting it’s the third light-rail station opened by the system in the past six months.

“South King County commuters will be able to get out of gridlock and reach their destinations using Link’s fast, reliable service. Thanks to our federal delegation—U.S. Sen. Patty Murray, U.S. Senator Maria Cantwell, Congressman Adam Smith, FTA Regional Administrator Linda Gehrke, and our partners at the U.S. [Department] of Transportation—as well as the Puget Sound Regional Council, for their tireless support of this project,” Constantine said.

Sen. Murray described the Angel Lake station’s opening as a “milestone” in Sound Transit’s expansion of transportation options for the region’s commuters, adding that the new station builds on overarching efforts to invest in such projects.

“I’m proud to support this step toward providing transit that is safe, reliable and ready to meet the 21st century needs in the South Sound,” Sen. Murray said.

Representatives say the South 200th Link Extension project will open four years earlier than outlined in the 2008 Sound Transit 2 plan. The total cost for the project is projected at $40 million less than its predicted $383 million budget. Officials attribute the project’s success so far to the system’s design-build team and federal partnership, as well as its “key partner” the Port of Seattle, all of which have been said to work closely with Sound Transit during the extension’s construction.

The 1.6-mile rail line from Angle Lake connects to the 18.8-mile Link system that runs between the Sea-Tac Airport and University of Washington. It features a 1,050-car parking garage with 70 surface parking spaces, as well as four charging stations for electric vehicles and storage for 52 bicycles on-site.

Port of Seattle Commissioner Fred Felleman said, “The Port of Seattle welcomes the extension of Sound Transit’s rail line to the new Angle Lake Station. Light rail ridership to SeaTac/Airport Station keeps climbing—up 11.5 percent for the yea. Making Sea-Tac more accessible is a win for the environment and a win for the traveling public, particularly with record-breaking growth at the airport.”