Metrolinx continues to make progress on its Crosstown line in Toronto.

Toronto’s Eglinton Crosstown light-rail project is moving along swiftly. After the tunnel boring machines came back up to the surface and were removed, Metrolinx, an agency created to improve the coordination and integration of all modes of transportation in the Toronto and Hamilton area, released some video showing project progress.

On Wednesday, April 29, LRV 6216 entered one of the tunnels for the first time, stopping just short of the Keelesdale Station:

According to Christof Spieler, author of the book Trains, Buses, People: An Opinionated Atlas of U.S. Transit, the Crosstown line will be one of the highest ridership rail lines in North America when it will open in 2021.

The Crosstown line is the blue line shown in the map below. It will run 4 miles north of downtown Toronto, connecting to the Toronto subway in three places.

Kennedy Station is the next picture. The station is located on the east end of the line. The light-rail station will be underground for easy connections to bus, subway, and the Scarborough RT.

The line is above the surface for a little more than 5 miles before it dips underground. 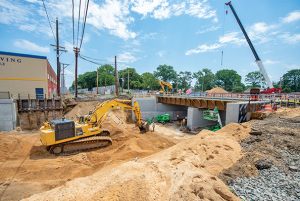 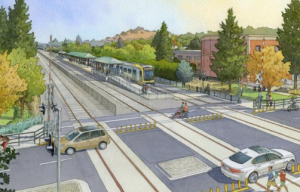 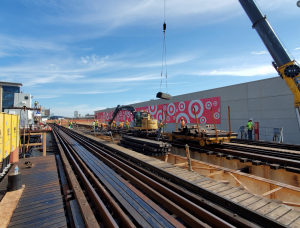