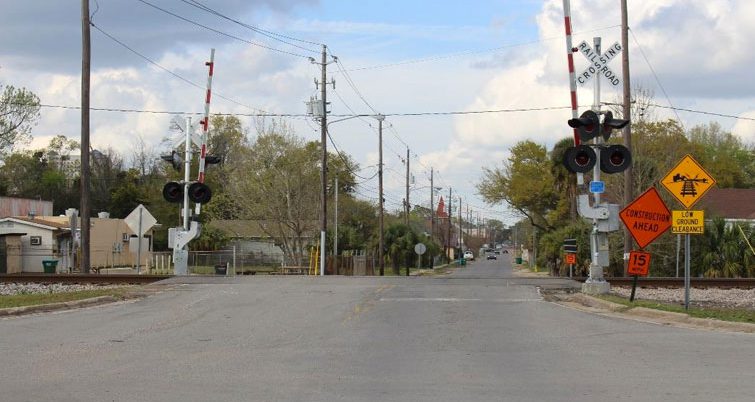 A northbound view of the crossing shows its high vertical profile.
National Transportation Safety Board

The National Transportation Safety Board (NTSB) has determined a failure “to mitigate known safety hazards” by the city of Biloxi, Miss., and CSX is the probable cause of a fatal motorcoach versus train accident that occurred in March 2017.

Four passengers in the chartered ECHO Transportation motorcoach were killed and another 37 were injured when a train struck the vehicle after it became grounded on what was described as a “high profile” grade crossing. NTSB says the motorcoach driver was attempting to free the vehicle from the crossing when a CSX train approached. The locomotive engineer applied emergency braking, but struck the motorcoach at a speed of 19 mph.

NTSB said the grade crossing “had an unusually high vertical profile,” which put low ground clearance vehicles, such as trucks and buses, at risk of being “grounded” on the tracks. Investigators found that previous maintenance work further increased the already high profile of the crossing. There were 23 known vehicle groundings at the crossing in a three-year period preceding the crash. NTSB explains CSX and the city of Biloxi were aware of the safety-critical events, but neither acted to mitigate hazard.

“This tragedy was preceded by numerous unheeded warnings in the three years leading up to it,” said NTSB Chairman Robert L. Sumwalt. “They came in the form of known groundings of other vehicles at the very same grade crossing where the fatal crash occurred. Warnings call for action.”

The NTSB said that inadequate guidance from the Federal Highway Administration on how to mitigate risks associated with high vertical profile grade crossings contributed to the crash.

The NTSB recommended that high-profile grade crossings have clearer, less ambiguous signage so that drivers of all types of vehicles can better determine if their vehicle could safely traverse the crossing.

In the NTSB’s report, the agency called for criteria to determine when an existing high-profile grade crossing should be modified or closed, and for better communication between all the entities involved in the maintenance and safety of grade crossings.

“It will take concerted, coordinated action to proactively address the safety challenge posed by high-profile grade crossings,” said Sumwalt. “And today’s findings and recommendations will provide regulators, policy makers and planners with the tools to do just that.”