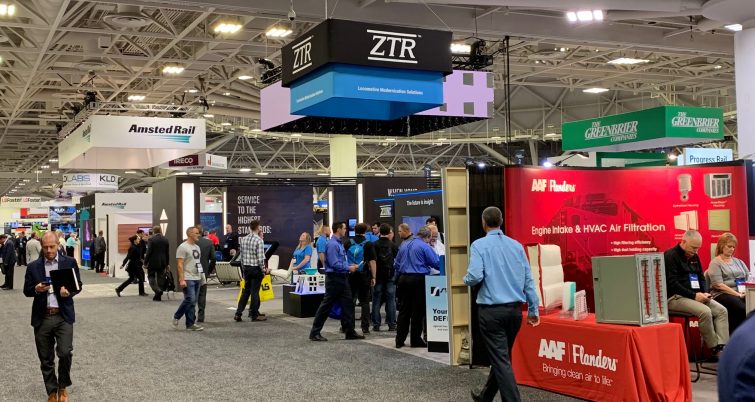 The American Railway Engineering and Maintenance-of-Way Association (AREMA) kicked off its technical presentations this morning at its annual meeting, held this year at the Minneapolis Convention Center.  The conference is being held concurrently with the Railway Interchange show, along with the Railway Supply Institute, REMSA, and RSSI.

The AREMA presentations this morning covered a range of engineering issues, and were well-attended in the Center’s main auditorium.

Daniel Headifen, Strategic Projects Interface Manager for New Zealand Railways Corporation discussed the railroads experience in recovering from the November 2016 Kaikoura Earthquake, New Zealand’s largest railway disaster as far as damage is concerned.  Major parts of the line were swallowed by huge slips, or tossed into the sea, yet the line was reopened ten months after the earthquake.

Duminda Wijesekera of George Mason University and Francesco Bedini Jacobini of the Federal Railroad Administration discussed ways for railroads to evaluate the cyber security of their networks and operations, and identify the unseen vunerabilities that, if hacked, could cause significant service disruptions.  The presenters discussed their research on ways these threats can be thwarted.

Next up were Amanda Kessler, Manager of Reference Surfacing for Amtrak and Asger Erikesen, CEO of Zetica Rail to discuss their project focused on integrating above- and below-ground trackbed inspection data, and the value it has brought to the planning of long-term and weekend undercutting projects on Amtrak’s Shore Line.

Charles P. Rudeen of Loram and Daniel W. Hampton discussed the challenges of identifying rail defects when the rail surface is rough enough to block ultrasonic testing from seeing inside the rail on CSX.  The railroad has been able to reduce rail surface defects steadily over the past several years, enabling them to reduce the number of broken rail incidents and derailments.

Jeremy Koonce, VP of Asset Management with Atom, Philip Ogram, Director of Structures with Genesee & Wyoming, and William Reihl, VP of Structures with Genesee & Wyoming discussed the mobile tools they use to manage the railroad’s 9,000 bridge assets throughout the country.  This program has streamlined their bridge management program significantly.

Finally, Jeffrey T. Schultz and Richard Bertoli discussed the revitalization of passenger rail service along Connecticut’s 62-mile New Haven-Hartford-Springfield rail corridor.  Massive investments have been made in the line’s infrastructure, and modeling has been employed to refine the railroad’s schedule.

More presentations are scheduled for the next two days.  Look for more reporting on the AREMA conference this week.