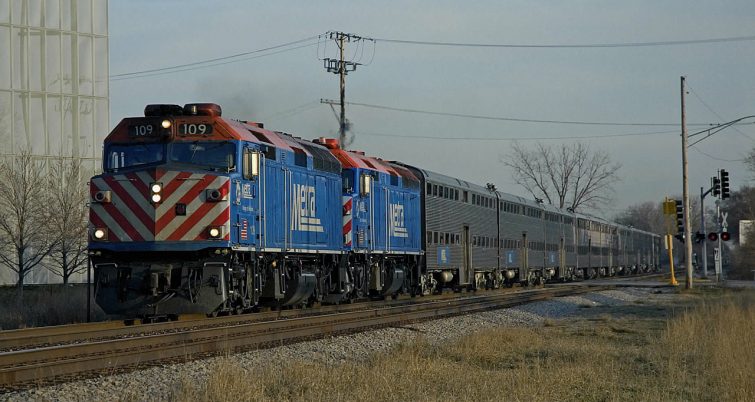 Chicago leaders got together on Nov. 16 to celebrate the completion of a major milestone for the CREATE project.

The Metra/Canadian Pacific Crossover Upgrades (B1) project has minimized Metra and freight train delays by installing five crossovers and associated signaling on the Metra tracks serving the Milwaukee District West (MD-W) line and Canadian Pacific in Franklin Park. This project was funded by Metra at the cost of $14.5 million and is the 31st project completed out of the 70 that are part of the CREATE Program.

“By completing the B1 project, Metra is continuing to achieve our goal to reduce all possible delays throughout the Chicago region,” said Metra CEO/Executive Director Jim Derwinski. “Creating greater efficiency for Metra and freight trains in Franklin Park also gives us future flexibility at the community’s Metra station without having to worry about potential delays.

”The five crossovers – switches that allow trains to pass one another rather than waiting behind one another – and associated signaling installed on the MD-W line and Canadian Pacific line are located between Scott Street and Ruby Street. In addition, another crossover was installed between the Indiana Harbor Belt and Canadian National Railway (CN) tracks between Chestnut Avenue and Grand Avenue.

“The CREATE Program continues to exemplify what can be accomplished when government agencies, private companies, and communities come together for one common goal,” said Cook County Board President Toni Preckwinkle. “Cook County looks forward to continuing our investments in rail infrastructure, to reduce the conflict between freight and passenger trains, ensuring that goods arrive at their destinations in a timely manner and making transit an even more viable and attractive option for commuters.

”This project reduces the potential for delays to numerous trains that use this portion of the Milwaukee District West line each day. Before the completion of the B1 project, freight trains needed to pass through the Canadian Pacific Bensenville Yard to access the Indiana Harbor Belt main line track. With this improvement, the 12 daily freight trains that pass through the area can bypass the Bensenville Yard on existing Metra tracks.

“This project and the CREATE program are prime examples of how multiple partners can work together to improve safety, quality of life and access to economic opportunity in so many of our communities,” said Illinois Transportation Secretary Omer Osman. “Under Gov. Pritzker, IDOT is making historic improvements in CREATE, with the governor’s Rebuild Illinois capital program identifying $400 million to invest. We look forward to working together to deliver even more transformational projects that enhance our overall transportation system in Illinois.

”The project also automates freight train access points through digitized switching controls that improve freight train speed throughout the yard. This reduces the potential for freight train delays to daily Metra trains and improves Metra flexibility at the Franklin Park Station. In addition, this project reduces delays to motorists, pedestrians and cyclists at nearby at-grade crossings due to increased train speeds and reduced gate down times.

“We are pleased that the railroad has completed this important first step in addressing train congestion through Franklin Park,” said Franklin Park Mayor Barrett Pedersen. “We hope that completion of this effort will lead to more projects in the future that will further reduce congestion.”

“We are excited to accomplish another milestone as a part of our overall goal to efficiently move people and goods in the Chicago area,” said Canadian Pacific Chief of Administration & Corporate Events and Assistant to the President Chad Becker. “I mproving service for customers and communities is a top priority and the completion of B1 is a key piece in the overall puzzle of the rail hub of the Country.