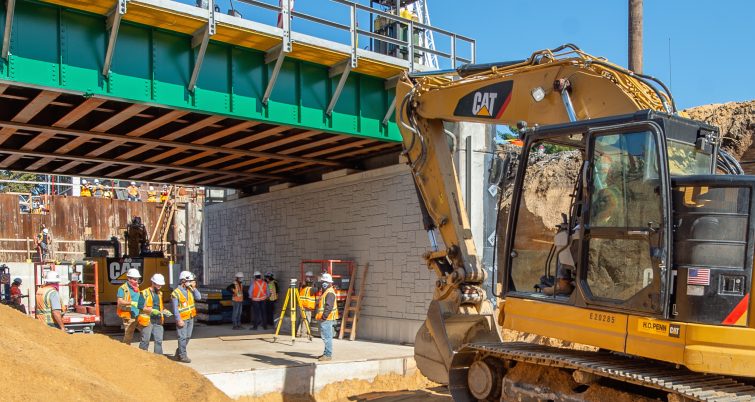 Crews are now working on the sixth and final under-grade crossing of the LIRR Expansion Project.
LIRR

It marks the final LIRR Expansion Project grade crossing that is being eliminated. Since construction began on the LIRR Expansion Project just over two years ago, grade crossings at Covert Avenue and S. 12th Street in New Hyde Park, New Hyde Park Road in Garden City, two crossings at Willis Avenue in Mineola, School Street in Westbury and Urban Avenue in New Cassel also have been closed.

MTA C&D worked in consultation with the village of Mineola on the plan to permanently dead-end the crossing and construct an ADA-compliant pedestrian bridge with elevators on each side of the tracks, just to the west of the crossing. A circular passenger drop-off area, or kiss-and-ride, will be constructed adjacent to the pedestrian bridge on the south side of the tracks.

When it comes to the under-grade crossings prime contractor 3rd Track Constructors, a consortium of Dragados USA, John P. Picone, Halmar International and CCA Civil, came up with an innovative method. It is essentially bridge construction involving a U-structure steel girder bridge that is built adjacent to the location of the existing grade crossing. The profile of the road is first excavated, with the track being supported by steel sheeting. During construction, trains are still running through the work area overhead while crews are building the bridge. The bottom of the bridge is a slab serving as the footing, while the top span is typically steel girders. Once the new bridge structure is constructed, a 48-hour weekend track closure takes place. The existing track is removed as well as up to 3,000 cu yd of soil supporting it. During the excavation, hydraulic jacks are put into place and the new structure is pushed into its finished alignment. Backfilling is then used for the abutment walls, and the precast concrete approach slabs for the railroad are laid down. Ballast comes next along with new rail, and by Monday morning the track is back in service.

The grade crossing gates at Main Street and other grade crossings are in the down position up to half the time during a.m. and p.m. peak hours. Doing away with the grade crossings eliminate the possibility of train and vehicle crashes, which have occurred seven times since 2007.

The LIRR Expansion Project is on budget and on time for completion by the end of 2022.