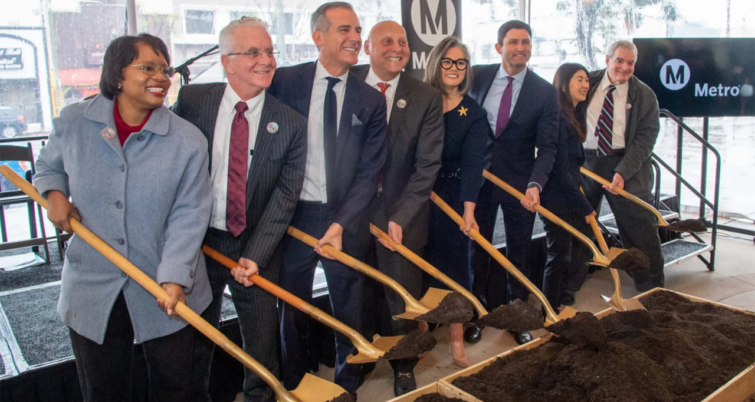 The first segment is a 6.7-mile at-grade alignment that includes 11 new stations; traction power substations; and a new maintenance and storage facility, which will house general administration, operation, and support services, and be equipped to perform LRV inspections, body and heavy repairs, and cleaning and washing. It is slated to connect the communities of Van Nuys, Panorama City, Arleta and Pacoima along the median of Van Nuys Boulevard, one of the Valley’s busiest corridors, according to LACMTA (see map, left). Service is expected to begin between 2028 and 2030.

Another 2.5-mile, three-station segment is planned to further extend the line from Pacoima to the Sylmar/San Fernando Metrolink Station. Design options for that project segment are now under study, the transit agency said. It will be built on LACMTA-owned right-of-way along San Fernando Road in a second construction phase.

The total project cost is estimated at $1.6 billion to $2 billion. It will be the first street-running, local-stop rail service in the San Fernando Valley in 70 years. The last Pacific Electric Red Cars discontinued service along Van Nuys Boulevard in 1952, LACMTA reported.

The new line is planned to connect with the Van Nuys Metrolink/Amtrak Station in addition to the Metrolink station at Sylmar/San Fernando. It will also provide key linkages with LACMTA bus lines, including the G Line (Orange) in Van Nuys and municipally operated bus lines.

“We are excited to begin delivering on our promise to bring light rail back to the Valley,” LACMTA CEO Stephanie Wiggins said. “The East San Fernando Valley line will serve a critical transportation need for residents and will be an important link in a network of improvements we’re building all over the San Fernando Valley.”