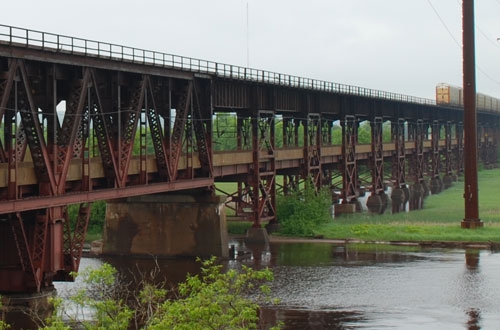 The top of the Oliver Bridge carries rail traffic, while the bottom hosts a two-lane highway.
Minnesota Department of Transportation

Canadian National is substantially complete with a rehabilitation project on a bridge linking its Minnesota and Wisconsin network.

Work on the Oliver Bridge over the St. Louis River between Duluth, Minn., and Oliver, Wis., will wrap up prior to the end of the year. CN says the strengthening project is part of its 2016 and 2017 capital programs.

The bridge was originally built in 1910 and connected the Spirit Lake Transfer Railway in Minnesota with the Interstate Transfer Railway in Wisconsin. The bridge currently carries approximately 20 trains per day on its upper deck with a two-lane highway on the lower deck. The highway was closed to traffic intermittently during the project, however, no further road closures are required and the highway was reopened on Nov. 21.