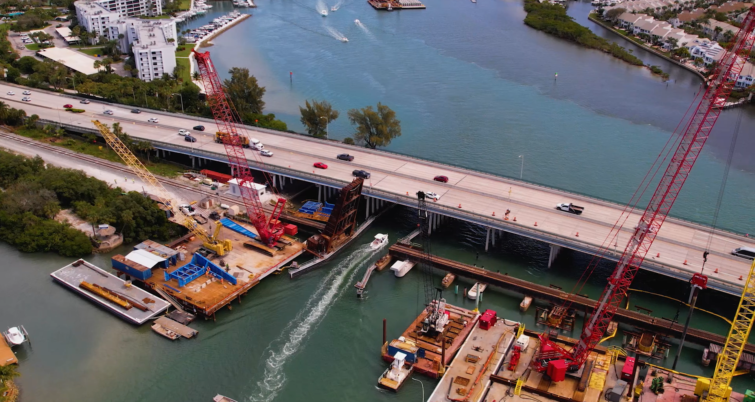 The Loxahatchee River drawbridge is one of two moveable bridge structures on the Brightline project.

Brightline will complete a critical piece of its $2.7 billion Orlando expansion project with the installation of a new railroad drawbridge over the Loxahatchee River in Jupiter, Fla.

The old drawbridge, built in 1926, will be replaced with a brand-new structure that will bring improved reliability and efficiency to the bridge, which carries trains across a popular navigation channel in Palm Beach County.

As one of two movable bridge structures on Brightline’s Orlando expansion project, the drawbridge represents a critical connection between south Florida and central Florida. Due to the type of construction work and necessary safety precautions, installation of the new drawbridge will require temporary closure of the navigation channel, impacting the drawbridge opening schedule over a seven-week period in April and May.

Brightline also is rehabilitating the entire 583-ft-long Loxahatchee River bridge with full replacement of the electrical system and operating machinery and the addition of a second track.

Once complete, boaters will see the benefits including improved dependability of bridge openings and closings and additional clearance for small watercraft. A new small craft navigation span is being added at the south end of the bridge, increasing the vertical clearance by 14 in. and allowing more vessels to pass without the need to open the drawbridge.

“The Loxahatchee River bridge represents one of the more complex construction projects along our Orlando extension,” said Michael Cegelis, executive vice president, Rail Infrastructure and Development, for Brightline. “Considerable work was required on the nearly 100-year-old structure to prepare it for high-speed passenger rail.”

Installation of the new drawbridge will require multiple barges and cranes in the navigation channel. The structure will be loaded onto barges and floated into place, blocking the waterway from boat traffic. At the start and end of the 52-day project, no boat traffic will be allowed to pass and freight traffic will be briefly suspended. During the six-week work period in between, the temporary span for the railroad bridge will be lifted out two times a day to accommodate the busy waterway and let boats pass.

Brightline’s bridge work is being coordinated with the U.S. Coast Guard, the Jupiter Inlet District, the Florida East Coast Railway, and local municipalities, and will be included in the USCG Local Notice to Mariners. The clearance improvement project is made in collaboration with the Jupiter Inlet District. The bridge rehabilitation project, led by contractor Scott Bridge Company, is expected to be complete in late 2022.

Brightline will communicate information to the public through a variety of channels including fixed and variable message signs along the channel, updates through Twitter, the Brightline website and via Brightline’s text alert message system.