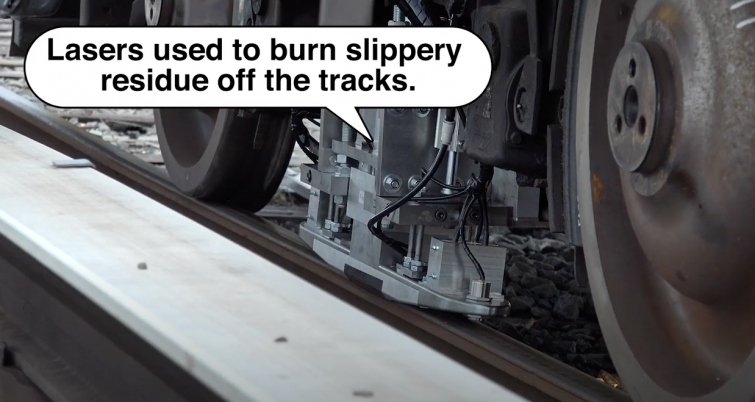 The MTA Long Island Rail Road (LIRR) announced that its industry-leading laser train is working even faster and harder to battle the danger of fallen leaves on the tracks. The LIRR has added another laser train and increased the speed to 25 mph, up from 15 mph, covering more of the system and minimizing the number cars from being taken out of service during the fall season.

Like other railroads that operate in seasonal environments, the LIRR experiences leaf fall-induced low adhesion. This condition is created by a slick substance, called pectin, left by crushed leaves on rails that gets even more slippery with light rain. When a train attempts to speed up or slow down, the pectin can cause the wheels to slip or slide along the rails. In severe cases the train will automatically make an emergency stop, because the on-board computer system perceives “slip-sliding” as the train not slowing down when it should. This slip-sliding and emergency braking also creates flat spots on the train’s wheels, forcing the LIRR to take much-needed equipment out of service for repairs.

“We have already seen this past month, with several days of misty mornings, nearly zero slip-slide events and estimate that we prevented 60 to 100 cars being taken out of service,” said Long Island Rail Road President PhillipEng. “We know we cannot control Mother Nature but we can take steps to better prepare and mitigate the impacts. Having these laser trains in our toolbox is a game-changer.”

Since 2018, the LIRR Maintenance of Equipment Department (MoE) has transformed how to tackle the negative effects of leaf fall season with innovative solutions such as partnering with Amsterdam-based manufacturer Laser Precision Solutions who pioneered the technology. The laser train works by using high-intensity lasers to remove contaminated layers from railway tracks, requiring only one pass to leave a smooth, clean rail behind. With the addition of a second train, all vital parts of the network can be cleaned every 24 hours. With an effect lasting at least 24 hours, this means that slip-slide will be minimized to a very low level.

The laser train is one part of the three-pronged approach to mitigate delays, short trains and subsequent cancellations that can occur due to slip-slide conditions. Other parts of the initiative include:

In addition, the LIRR has enhanced it’s computerized train-tracking system to allow for automatic, real-time reporting of low adhesion conditions from the M7 fleet, enabling the MoE department to take corrective action more quickly. On-board sanders are on diesel trains to help improve traction when wheel slippage appears to occur. Plus, crews manage vegetation along the right-of-way as a preventive measure.

In 2019, the number of canceled trains fell 48 percent. The LIRR had 32 percent fewer shortened trains last fall compared with 2018. Weather-related delays in November fell about 65 percent compared with November 2018. While the laser train was only deployed on specific branches, it helped reduce slip-slide for the entire network by 17.4 percent. On its specific branches slip-slide was further reduced by between 53 and 65 percent. While it is still early in the 2020 leaf-falling season, so far the LIRR has not experienced any wheel damage from slip-slide conditions on wet or windy days.