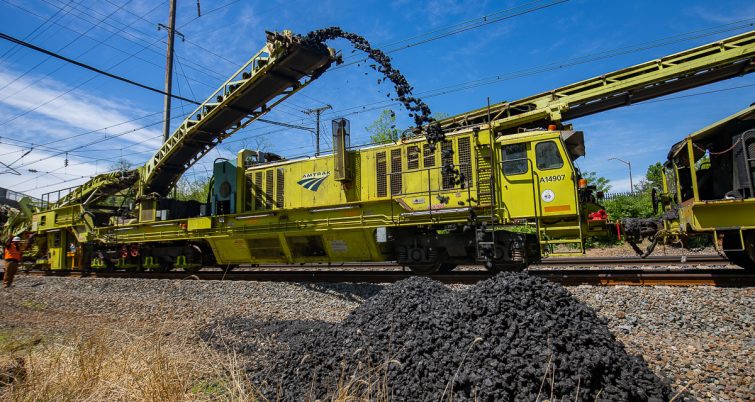 Editor’s Note: This story appeared in the August issue of RT&S. The authors are Amanda Kessler, P.E., and Evan Whatley, EIT.

Each fiscal year, Amtrak spends approximately $20-55 million undercutting between 25 and 50 miles of track on the Northeast Corridor between Washington, D.C., and Boston. With limited track time available for maintenance work, determining work locations with a high percentage of end-of-life or fouled ballast and planning the delivery and disposal of ballast material are critical to an efficient undercutting operation. This article discusses the economic benefits of controlling undercutting depth and reclaiming serviceable ballast and presents how Amtrak is planning on using ground-penetrating radar to better achieve those economies.

Ballast life expires when fine material accumulates and fills voids between particles and reduces permeability to a critical value where the ballast no longer performs its drainage and track support functions. Renewal of large stretches of fouled ballast is performed on Amtrak with a production undercutter. As old ballast is excavated there are two basic options for handling the ballast. The machine can either attempt to 1) “reclaim” a portion of ballast for reuse and discard (waste) the remainder or 2) waste all the cut materials. Attempting to reclaim ballast material usually provides the most economic benefit by separating large ballast particles from the fine material before moving the fines to hopper cars or being cast to the wayside. Whether the material is cast or collected depends on topography, right-of-way limits, and the presence of access roads, among other considerations.

As track is undercut, the amount of new ballast required to restore the track to its original elevation increases with depth of cut. At the same time the new ballast required decreases when more of the larger excavated particles are returned to track after the sieving process. Research undertaken on Amtrak’s Northeast Corridor has quantified the relationship between depth and volume of fouling materials specific to the ballast geology and operating environment.1 The  relationship is that the percentage of fines increases with depth into the ballast and sub-ballast layers. This assumes the mechanism for ballast fouling comes from degradation of the ballast material over its life cycle and not from an external source adding fines to the ballast surface such as poor drainage depositing fouling materials or concrete tie abrasion.

Research shows that increasing the depth of cutting can provide a significant financial benefit up to a certain optimum point, but beyond this point costs will rise due to slower production rates which will increase the cost of labor and equipment. Alternatively, a deeper cut equates to a longer life of the renewed ballast as the clean ballast has more void volume to hold the fouling fines that accumulate over time. Life-cycle costs for ballast are thereby reduced by being spread out over a longer period. With these results it is important to find the balance between depth of cut and cost of undercutting operations to maximize the ballast life cycle. Combining this information with the relationship between depth and reclaimable ballast, it is possible to calculate a theoretical ideal cut depth for a given section of track.

Ground-penetrating radar (GPR) is a tool that can assist in determining substructure layers for the purpose of planning undercutting work with good economic decisions. Although it is not usually a primary decision driver for undercutting planning, it is important to consider the economics of the undercutting depth. For example, Amtrak’s typical depth of undercutting is approximately 14 in. below bottom-of-tie. However, this depth may be too shallow or too deep when taking into consideration subsurface layer depths and fouling index. Good, useful ballast is potentially being wasted, incurring higher costs than necessary for new ballast. The most efficient way to better plan undercutting depth and ballast reclaim percentage is to look at information derived from GPR data.

GPR can provide information about the subgrade that allows undercutting location and depth planning without traditionally invasive and time-consuming geotechnical testing procedures. Amtrak quantifies the degree of fouling in the GPR data by using Selig’s Fouling Index which is the sum of the percent of ballast material by weight passing a No. 4 sieve (0.187-in. opening size) plus that passing the No. 200 sieve (0.0029-in. opening size). This variability is visualized on a heat plot, where “hotter” colors indicate heavier ballast fouling while “cooler” colors indicate the opposite.

The non-uniform distribution of ballast fouling along the track is typical and is mainly due to track geometry conditions or rail irregularities that produce impact loading and faster ballast breakdown local to these features. Further ballast breakdown is produced at these locations when they are

repeatedly tamped. The contributions of breakdown from pounding at track geometry locations and tamping can produce highly localized “hot spots” where ballast is at or beyond its useful life, while just a short distance away the fouling may be minimal.

As the ballast breaks down from loading, tamping fine materials begin to fill the void volume. In lab analysis, selected sieves are used to characterize this breakdown at discrete particle size intervals. The end of ballast life can be said to occur when the remaining voids are too small to allow the material to drain rapidly such that water remains in the fouled ballast over long periods of time.

During undercutting, operators can send excavated ballast material to 1) be wasted in its entirety, 2) the sieve shaker for sorting, or 3) split the material between the two. There is a considerable economic advantage to return as much of the older, yet still useful large ballast particles, as possible to track during the undercutting process because it reduces the need for new ballast. However, there also is the possibility that attempting to recover highly fouled and likely wet ballast will result in clogging of the sieves on the undercutter. This causes considerable delays to the operation to remove the clogging material.

An undercutting wasting/reclaiming operation that is highly efficient wastes only the material smaller than the sieve size used to separate the desired large particles from fine material and returns to track only the particles that are larger. Figure 1 shows ideal gradation curves for wasted and reclaimed ballast. The solid black line shows the gradation of the material being wasted and the dashed black line shows the gradation of the material being reclaimed and put back in the track. The goal for wasted material is for there to be 0 percent passing through the sieve size in the undercutter shaker box. In an ideal situation, depicted in Figure 1, approximately 5 percent passes through a ¾-in. sieve and 5 percent of the material put back in track contains fines. However, more commonly a considerable amount of larger particles are wasted as shown by the solid black line in Figure 2.

This is often the result of operator decision to directly waste at least some of the excavated material instead of first sending it to the sieve screens. The intent of wasting potentially recoverable ballast is to avoid overloading the sieve with heavily fouled and/or wet material that might clog the sieve and require much delay to the production schedule to remove this material. This decision is usually made by the operator who reacts accordingly to these conditions as they are encountered. However, with the help of GPR information the decision to waste or reclaim can be planned ahead of time and the production schedule planned to account for higher fouled areas, reducing the amount of large ballast in wasted material and small fines in reclaimed material.

This estimate of reclaimable ballast based on Fouling Index was derived from field testing, sampling and gradation analyses of in-track ballast,2, 3 which have shown that ballast degradation typically follows a predictable pattern where the increasing Fouling Index relates to a shifting of the gradation curve to finer gradations as the voids become progressively filled with fouling fine material. This fouling pattern, shown in Figure 3, has emerged from ballast samples taken over multiple years as traffic

loading has accumulated and has made it possible to use the GPR-indicated Fouling Index to estimate the percentage of potentially reclaimable ballast for a given sieve size used on an undercutter.

If it is assumed that a Selig Fouling Index of 30 corresponds to the end of ballast life (highlighted), and if, for example, the choice is between using a 1-in. or a ¾-in. sieve, the y-axis intercept indicates the estimated rate of ballast return. The ballast gradation data in these example graphs are all for an AREMA No. 4 gradation with a maximum particle size of 2 in. Therefore, these graphs must be revised to be used for Amtrak’s No. 3 AREMA gradation with its maximum particle size of 2.5 in.

Efficient production is an important aspect of the undercutting process at Amtrak, but the machine can only move as fast as the material can be processed. Therefore, it is critical for Amtrak to develop a more holistic planning approach to undercutting where the Fouling Index and moisture levels are known beforehand from GPR data and are used to make decisions of wasting versus attempting to reclaim in advance. Another important element that is included in this planning decision is the amount of large-sized ballast that can potentially be recovered. This amount can be estimated from the GPR-derived Fouling Index.

At the time of this writing in Summer 2020, Amtrak Engineering is applying the proof of concept to data-driven undercutting to the Track 1 undercutting project between Bridge and Grove interlockings south of Baltimore, Md. Although this 14-mile section of track was selected for undercutting prior to implementation of GPR data, we are analyzing preconstruction data to determine locations that will have excessive moisture and fouling and therefore slower production rates. The track also was analyzed to determine the depth of undercutting and where to waste or reclaim ballast. The intent is to share this information with the field managers for planning and gaining valuable feedback. In addition, further ballast sampling for laboratory testing has been taken to further refine Amtrak’s approach.

In conclusion, the information that is derived from GPR data can be used in several ways to plan undercutting projects. Amtrak is applying the principles discussed here to realize economic benefit to planning depth of cut based on ballast layer depth. From there, it can be determined whether to reclaim or cast old ballast based on a combination of the fouling index, moisture levels, and layer depth. The final feature that should be considered in conjunction with ballast layer depth is the shaker box sieve size. Amtrak is re-evaluating the sieve sizes used on the undercutter, redeveloping the Fouling Index versus return studies for the AREMA No. 3 gradation of ballast, and deploying GPR as a work planning tool. By utilizing existing research and GPR technology, Amtrak hopes to make the undercutting process more effective in planning, production, and quality.