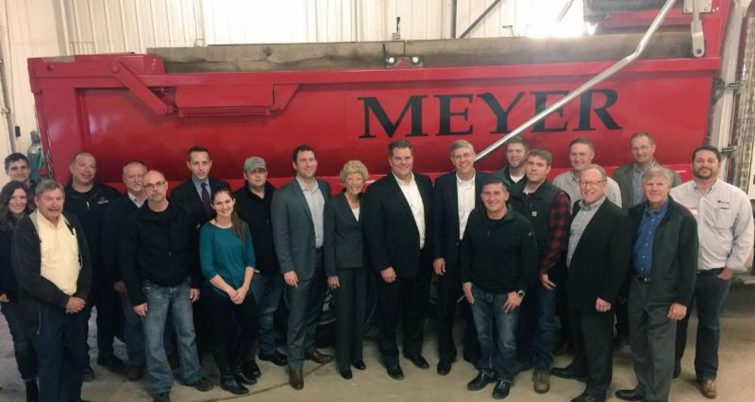 Paulsen spoke with company officials, community leaders and rail industry representatives about the need for infrastructure investments and pro-business economic policies, and participated in a discussion regarding legislative issues affecting the freight rail industry.

Attendees of the tour also took part in a brief discussion of policies and government regulation, includings talks of the proposed FRA Part 243 and beliefs that it could hurt small contractor businesses, like Meyer Contracting, for example.

Those who took part in the tour and discussion also noted the importance of the Building Rail Access for Customers and the Economy (BRACE) Act, which, if passed by Congress, would enable small, local U.S. freight railroads to boost their reinvestment for upgrades and further their abilities to expand the “first and last mile” of transportation infrastructure.

Participants also discussed the private nature of America’s freight railroad network which, unlike other modes of freight transportation, does not rely on federal support for the expansion or maintenance of its network.

Additionally, attendees of the event called for maintaining the existing federal limits for truck size and weight, stating that at current weight and size limits trucks cause more damage than they pay for on U.S. highways.

Elected to the U.S. House of Representatives in 2008, Paulsen serves on the House Ways & Means Committee, which has jurisdiction over economic and trade policy and is the chief tax writing committee in the House, NRC explained.

Paulsen is also chairman of the Joint Economic Committee, a bicameral Congressional Committee comprised of 10 members from the U.S. Senate and the U.S. House of Representatives, which studies and performs research on matters relating to the U.S. economy, and advises Congress on how best to bolster economic growth and job creation.

Minnesota currently has 19 freight railroads in operation, and the state maintains more than 4,292 miles of track, NRC said.