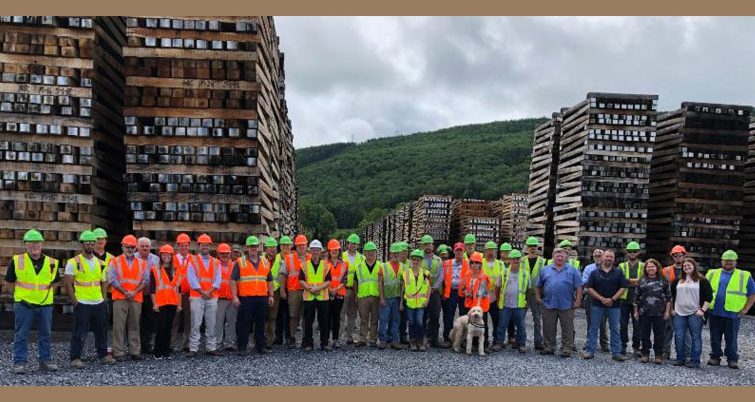 Stella-Jones hosted staff for Sen. Tim Kaine (D-VA) and the National Railroad Construction and Maintenance Association Aug. 2 for a tour and discussion of transportation public policy at the company’s Goshen facility.

“Sen. Kaine serves in a crucial role in Washington, D.C., and we appreciate his leadership advocating for increased infrastructure investments,” said Stella-Jones Vice President of Marketing George Caric. “The privately funded and maintained freight railroad network is one of the few bright spots in America’s infrastructure network and recently received a ‘B’ grade from the American Society of Civil Engineers.”

Caric added that Stella-Jones will continue to spend the capital needed to improve its facility and to provide railroads with crossties that bolster their infrastructure.

The Goshen facility also treats more than 1 million ties per year that officials said are supplied from sawmills throughout the state of Virginia.

Attendees at the tour also took part in a brief policy discussion about the importance of the Building Rail Access for Customers and the Economy (BRACE) Act. The BRACE Act is intended to allow small, local U.S. freight railroads to increase their reinvestment to upgrade and expand the “first and last mile” of transportation infrastructure.

Attendees also discussed the private nature of America’s freight railroad network which does not rely on federal funding for the expansion or maintenance of its network. Officials said those in attendance also discussed a need to maintain the current federal limits for truck size and weight.