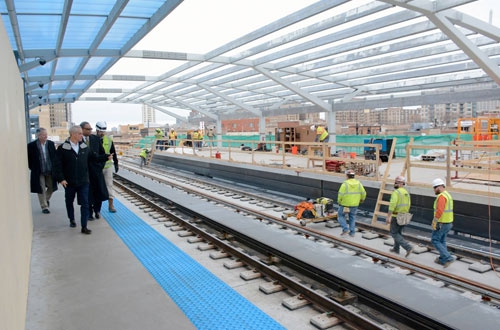 Chicago Mayor Rahm Emanuel and CTA President Dorval R. Carter, Jr., helped mark the new phase of the project, which is more than 75-percent complete, and will deliver a modern, fully accessible station and improve century-old tracks by the end of this year.

Once the project is completed, the station will function as a new Red-Purple Line transfer station for customers. The station will remain open during the remaining construction and customers will see no changes to Red and Purple Express service.

To date, the CTA has completed the reconstruction of two southbound tracks that carry Red and Purple Line Express trains, as well as the northbound Red Line track. Work crews have completed one of the two new, modern island platforms that replaced platforms and infrastructure that were nearly 100 years old.

“All the developers and new business owners who have come into this area in the last year have said that it was the rehab of the Wilson ‘L’ that attracted them to Uptown,” said Chicago Ald. James Cappleman. “If there ever was a case study for what the rehab of an ‘L’ stop can do, the Wilson ‘L’ is it.”