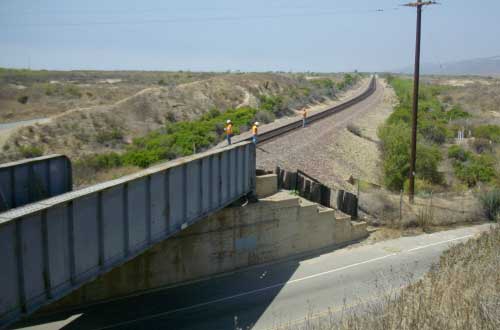 Work along the LOSSAN rail corridor in San Onofre.
SANDAG

The California Transportation Commission (CTC) allocated more than $217 million to 72 projects in the state including more than $60 million for state rail projects.

“Caltrans is working to ensure every dollar counts when it comes to California’s transportation infrastructure,” said Caltrans Director Malcolm Dougherty. “These investments will benefit Californians by improving the economy and the environment.”

The bulk of the rail focused allocations, $49.99 million, was to the San Diego Association of Governments for improvements along the Los Angeles-San Diego-San Luis Obispo corridor. The work includes the conversion of single-track to double-track rail, bridge replacements and signal improvements.

The San Bernardino Associated Governments received a total of $9.71 million for two grade separation projects; the first in the city of Colton and the second in the city of Yuma.

The North County Transit District received $1 million to replace a turnout that is near the end of its useful life and will allow for increased track speed. Finally, the Capitol Corridor Joint Powers Authority received $200,000 to install two wayside power cabinets at the Oakland Maintenance Facility.