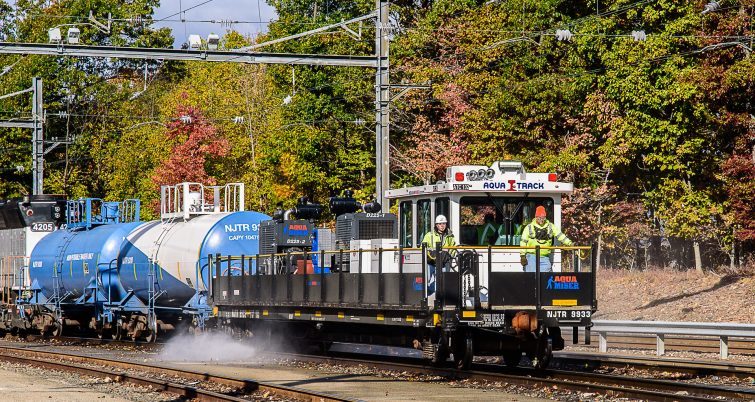 NJ Transit has begun its annual battle against leaves on the rails.

Each fall, millions of leaves land on railroad tracks, often creating traction problems for locomotives and powered vehicles. Significant work is required to clean the rails, and NJ Transit deploys a system called “AquaTrack” to do the job.

The AquaTrack equipment is a high-pressure power washing system that removes the oily residue left behind by fallen leaves on the tracks to prevent train delays caused by “slippery rail” conditions. In addition to oily residue, rainy conditions can worsen the problem.

New Jersey Department of Transportation Commissioner and NJ Transit Board Chair Diane Gutierrez-Scaccetti said, “The AquaTrack is just one example of how we continue to leverage technology to keep our operations running efficiently. Our core mission is to move New Jersey safely and reliably and we are using every tool at our disposal to accomplish that.”

NJ Transit President and CEO Kevin Corbett said, “As NJ Transit continues to improve our rail network’s on-time performance, AquaTrack units help maintain service reliability to our customers. These two AquaTrack units are deployed strategically throughout our system to keep our tracks clean and our trains rolling throughout the fall season.”

The AquaTrack system has been in use by NJ Transit since October 2003.  It consists of two 250-hp diesel engine units mounted on a flat car with an operator control cab. Two pressure-pump units dispense water up to 20,000 lb per square in. directly to the top of the rail. The process uses 17 gal of water per minute.

The original AquaTrack operated primarily on the M&E and Montclair-Boonton lines, which face challenges including the hilly areas around Glen Ridge and Summit stations, washing the rails twice a day Monday through Friday—once overnight and again during midday hours. On weekends, the Pascack Valley and Main/Bergen County lines are usually covered.

In 2016, NJ Transit unveiled its second AquaTrack unit, which allows the cleaning process to maintain a larger coverage area in helping to prevent delays caused by slippery rail.

Here is a video of AquaTrack in operation: