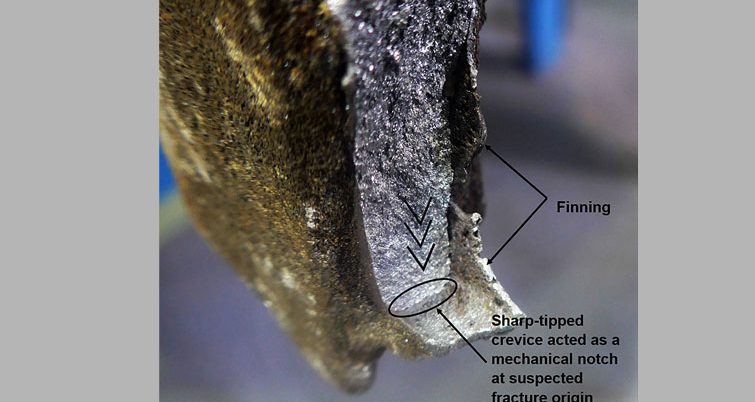 Chevrons pointing back to the fracture origin at thermite welding finning anomaly.
Transportation Safety Board of Canada

The Transportation Safety Board (TSB) of Canada has determined that a derailment last year near Dominion City, Manitoba, was caused by a thermite weld failure.

The TSB investigation determined the thermite weld fracture displayed “finning,” which occurred when molten metal leaked from the casting mold and did not fully fuse with the rail. The thermite welding process had been completed in 2008. The investigation also noted that due to the presence of multiple persistent and recurring geometry defects and track conditions, the rail in the vicinity of the thermite weld had been experiencing higher stresses during normal train operations. With the repeated tensile forces due to normal passing of each wheel of a train, the finning became the origin site of the fracture that led to the brittle failure of the thermite weld.

The failure of the weld and resulting derailment sent 22 covered hopper cars loaded with corn off the tracks of Canadian Pacific’s Emerson Subdivision. There were no injuries.

Although CP had been monitoring the priority surface defects in accordance with the federal Track Safety Rules and its Red Book requirements, the thermite weld failed before the priority defects reached a level that required immediate repair. TSB says that if track geometry priority defects are not identified, monitored and mitigated in a timely manner, further track structure degradation can occur, increasing the risk of derailments.

Following the accident, CP completed a rail replacement program on the Emerson Subdivision, installing about 5,000 feet of continuous welded rail.