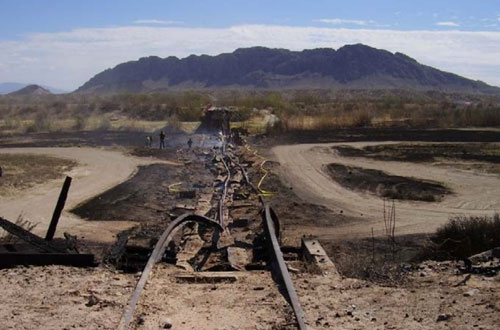 The Presidio-Ojinaga International Rail Bridge following a fire in 2008.
Texas Department of Transportation

A recently recommended federal transportation grant isn't simply helping to perform work on a shortline in Texas, it's helping repair a key cross border link between the U.S. and Mexico.

The rail bridge is one of only seven rail gateways between the U.S. and Mexico and has been out of service since fire damaged it in 2008. In addition to the Presidio-Ojinaga bridge reconstruction, the awarded grant funding will help provide for track, bridge and drainage improvements on 72 miles of railroad from the border to Alpine, Texas. The South Orient Rail Line runs 391 miles from the Texas-Mexico border at Presidio through San Angelo to south of Coleman. The line is owned by the state, but operated and maintained by Texas Pacifico Transportation, Ltd. The entire project is expected to cost $16.2 million to complete.

“The South Orient Railroad has become an increasingly important freight line for the agriculture and oil and gas industries in West Texas. With the replacement of the rail bridge at Presidio, the improvements to the track, bridges and crossings will allow enhanced freight opportunities for communities in Texas and between Texas and Mexico, with greater efficiency and safety,” Texas Transportation Commission Chairman Tryon Lewis said.