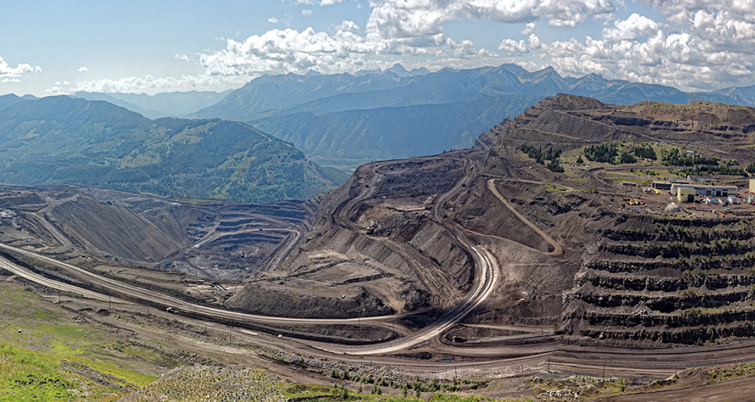 Elkview Operations is one of Teck’s four steelmaking coal operations located in the Elk Valley of British Columbia.

CN and Teck Resources Limited, a diversified resource company with major business units in copper, steelmaking coal, zinc and energy, on Dec. 4 announced a long-term agreement for shipping steelmaking (metallurgical) coal* from Teck’s four British Columbia operations between Kamloops and Neptune Terminals, and other West Coast ports. The agreement, which runs from April 1, 2021 until December 31, 2026, will replace Teck’s current 10-year agreement with Canadian Pacific, which expires March 31, 2021. CP, which interchanges with CN at Kamloops, will continue to serve Teck at originating mine sites.

The CN agreement, terms of which are confidential, “will enable Teck to significantly increase shipment volumes through an expanded Neptune Terminals,” CN said. “The agreement also provides for investments by CN of more than $125 million to enhance rail infrastructure and support increased shipment volumes to Neptune.”

“CN is proud to sign this agreement with Teck and to be playing such a significant role in moving the steelmaking coal from Kamloops to the last mile at Neptune Terminals on Vancouver’s north shore,” said CN President and CEO JJ Ruest. “This significant volume commitment from Teck is further proof of CN’s ability to serve our customers into Canada’s trade gateway on the West Coast. This agreement also further enhances CN’s role as a supply chain enabler for Teck’s shipments into Neptune Terminals.”

“This agreement and the associated infrastructure investment will provide us with rail capacity to match the major upgrades under way now at Neptune Terminals,” said Teck President and CEO Don Lindsay. “We expect this will lower our total transportation costs and improve overall rail and terminal performance.”

CP’s movement from the mine sites to the CN interchange at Kamloops represents approximately two-thirds of the journey Teck’s coal currently makes along CP’s network. Based on CP’s current estimates and assumptions with respect to its performance and financial condition, CP estimates that this change in length of haul for the affected volume could, without the addition of offsetting volumes, negatively impact earnings by approximately 1% in 2021.

CP said it “will continue to work with Teck to develop customized service tailored to meet Teck’s future shipping requirements, while maximizing the additional capacity opportunities.”

“We have long valued Teck as a customer and will continue to be an important supply chain enabler for them from their mine sites to our interchange with CN at Kamloops,” said CP President and CEO Keith Creel, putting a positive spin on the upcoming loss of business. “This announcement will allow us to focus on other, value-added opportunities from Kamloops to Vancouver. We are excited about the capacity opportunities this creates for us, to and from the West Coast, and look forward to finding win-win opportunities for other customers within this integral corridor. There is a significant amount of work required to ensure that the interchange at Kamloops is capable of accommodating the additional interchange volume in April 2021, and CP expects that all stakeholders will do their part. We will be working hard between now and Q1 2021, and beyond, to protect our fluidity through Kamloops for all shippers dependent on this critical corridor.”

“We view the deal as a minor positive for CN and a minor negative for CP,” said Cowen and Company Managing Director and Railway Age Wall Street Contributing Editor Jason Seidl. “However, given that the deal only begins in 2021 and we do not currently have published 2021 estimates for either railroad, we are leaving our models and estimates unchanged at the present time.”

* Metallurgical coal, also known as coking coal, is a grade of coal that can be used to produce good-quality coke, an essential fuel and reactant in the blast furnace process for primary steelmaking. The demand for metallurgical coal is highly coupled to the demand for steel.