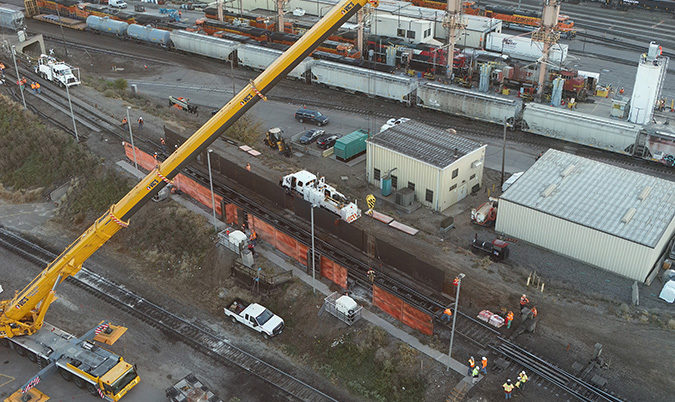 In railroading, a “bowl” – or classification yard tracks – is where freight cars are sorted and assigned to departing trains. This processing is done in what we call a hump yard. Many ingredients work together to ensure the rail cars aren’t “mixed up,” as in put on the wrong train, as they reach the bowl.

The process begins when cars are pushed atop a small incline, or hump. Then gravity propels the car downward, with its speed controlled by a braking system consisting of a master retarder and secondary retarders.

Factors such as car weight, length of track to traverse and grade of the hump are calculated by a computer that then engages the braking system. The goal is to have each car couple, or connect, at approximately 4 mph in the bowl. Too fast could result in a derailed car; too slow could mean the car doesn’t reach the desired location. Multiple radar detectors and wheel detectors along the track monitor car speed so a secondary braking system can further slow them on their journey to the bowl tracks.

“The master is the first line of defense if something goes wrong,” James Schenker, General Signal Supervisor, said. “It will stop a car super-fast. It’s two huge slabs of metal coming together onto the wheel of the car, and however hard you push the brakes is how quickly it’s going to stop.”

Like all railroad infrastructure, the retarders at BNSF’s eight hump yards are regularly inspected and routinely maintained. But after an average of 1,500 cars a day over almost 10 years, the master system at our 300-acre Northtown facility in Minneapolis reached the end of its lifespan and needed to be replaced.

When there is a planned outage of the classifying process, all teams work within a designated time window to be as efficient as possible. While Signal teams removed and replaced the master retarder, our Structures team tended to the scale on top of the hill and Engineering worked amid the 53 bowl tracks. In addition, our NX group – a specialized team in Engineering — continued upgrading systems for automation of entering and exiting the yard with the installation of new housing cases for remote control equipment.

“Changing out a retarder in a hump yard is my team’s largest project,” Schenker said. “We installed this model retarder in our secondary in May and after seeing how it worked over these past months, we moved ahead with the master replacement.”

The new retarder is an upgrade and should require less maintenance, which means fewer unplanned outages for the hump yard.

“This is a much more modernized version,” Schenker said. “We have better control, better computer knowledge.”

Teams from our Pasco, Washington, yard were on site in Northtown to prepare for their own master retarder replacement next year.

With the locations’ colder climates, both use retarders operated by hydraulic cylinders instead of the pneumatic systems, which don’t work as well in colder weather. The new master retarder has three sections, each about 40 feet, with approximately 16 hydraulic cylinders per section operating independently. This allows the three different “sections” to be closed to varying degrees, or not at all.

“I replaced the master in 2013 at Northtown, so I’ve seen two of these replacements now. This is a newer style hydraulic retarder,” Ryan Skarhus, Engineering Systems Classification Yards, said. “It’s easier for our Signal department to maintain. Fewer moving parts, fewer things breaking, less down time on humping cars.”

That’s good news for production at the third-largest hump yard on the BNSF system. Situated on the Northern Transcon between Chicago and the Pacific Northwest, Northtown is a major gateway for items like agricultural commodities heading west for export, as well as industrial products like lumber moving east, and consumer products making their way to surrounding states.

This story is provided courtesy of BNSF.